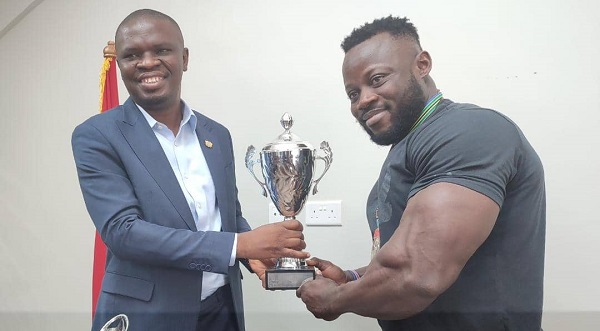 The Minister of Youth and Sports, Mr Mustapha Ussif, has urged all sports federations and associations recognised by the National Sports Authority to inform the ministry about all their travels before leaving to represent the nation in international competition.

According to the minister, this would afford the ministry the opportunity to support all the national teams and also facilitate their travels.

"I urge other federations that if they have tournaments and programmes to attend, they have to inform the ministry early so that government can prepare to support you and facilitate your travel to represent the nation," Mr Ussif said.

"Don't wait till when the event is just a week away to rush the ministry because this is a public office and every expenditure must be planned and accounted for," stressed the minister when he received members of the victorious national bodybuilding team, Black Muscles, to his office in Accra yesterday.

The Black Muscles, led by the President of the Ghana Bodybuilding and Fitness Association (GBFA), Mr Abdul Hayye Yartey, visited the minister at his office to present to him medals and trophies they won at the recent Arnold Classic Championship.

In all, Ghana won two gold medals, two silver medals and two fourth-place medals at the championship in South Africa.

During their interaction, the GBFA Vice President, Mr Charles Owusu-Ansah, informed the minister that the national athletes personally financed their travel to compete in South Africa because there was no state support for the team.

Mr Yartey also pleaded with the ministry to provide support for the athletes to offset some of the costs they incurred to travel to South Africa.

He disclosed that Ghana was scheduled to host the West Africa Bodybuilding Championship in August next year.

In response, the Minister asked the GBFA to put in a request through the National Sports Authority for financial assistance to offset the cost of their trip to South Africa.