Red-hot Faisal out to sting Sharks 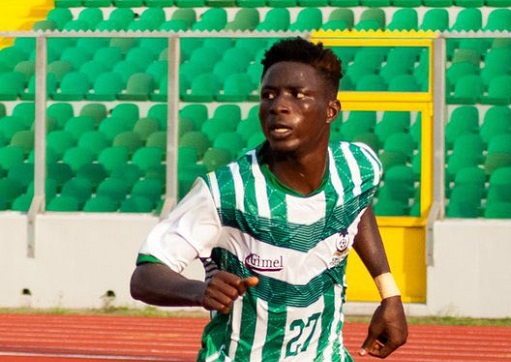 Ibrahim Zubairu, King Faisal's danger man, and Obuobi Tetteh of Elmina Sharks will be in action on sunday
30.5k Shares

King Faisal will have a chance to go top of the Ghana Premier League table and open a three-point gap off their nearest rivals if they beat visiting Elmina Sharks at the Baba Yara Stadium on Sunday, with leaders Asante Kotoko sitting out this weekend following the postponement of their clash with Hearts of Oak.

Faisal coach, Nurudeen Amadau, and his charges are enjoying a good run this season with three successive wins and a draw against Medeama, and will seek to build on their shock victory against Kotoko.  That 3-2 win against Kotoko was a massive statement of intent by Faisal who survived relegation last season but have set the competition on fire with a young team and a renewed sense of energy.

Despite his relative inexperience in the topflight of Ghana football, Coach Nurudeen Amdau will expect his deadly marksmen Ibrahim Zubairu and Ibrahim Osman who together have scored seven goals out of nine recorded by the club to spearhead their quest for a fifth win of the season against Sharks in Kumasi.

The duo of Zubairu and Osman have been deadly against opposing defenders and remain a clear and present danger for Sharks defenders who need to find a way to put the brakes on the free scoring Faisal attackers on home soil.

Currently lying ninth on the league log, Sharks have struggled to keep up with the competition and with the resignation of head coach Nii Odartey Lamptey last month, a lot of pressure will be brought to bear on their new coach Bernard France to survive against an in-form Faisal side buoyed by their recent victory over Kotoko.

This afternoon, the Ohene Ameyaw Park in Techiman will witness a fierce encounter between 12th-placed Eleven Wonders and Dreams FC led in attack by teenage sensation Abdul-Fatawu Issahaku whose goals have powered the Dawu-based side to the fifth position on the league log with three wins and a draw in five matches.

Tomorrow afternoon, seventh-placed Great Olympics will trek to the Nana Agyemang Badu Park to face a resurgent Aduana Stars side in a tough encounter which favours the home side.

At the Bibiani Dun’s Park, ninth-placed Goldstars will play host to Bechem United on Sunday, while
Accra Lions will play as guests of Karela United at the Crosby Awuah Memorial Park in Ainyinase.

Sixth-placed Real Tamale United will entertain Medeama SC at the Aliu Mahama Stadium in Tamale on Sunday, with tottering WAFA, 16th on the log, will host Ashantigold at Sogakope.

Glamour side Legon Cities will clash with struggling Berekum Chelsea at the El-Wak Stadium in Accra.