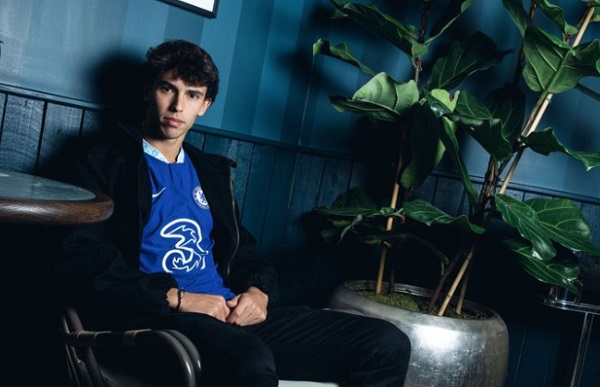 Chelsea have signed Atletico Madrid striker Joao Felix on loan for the rest of the season for a fee of 11 million euros (£9.7m).

Felix has also signed a one-year extension to his Atletico contract until June 2027.

Boss Graham Potter said injuries had "sharpened" Chelsea's focus in their pursuit of the Portugal international, with Christian Pulisic ruled out for a couple of months.

"He will make a difference in the final third of the pitch and I'm looking forward to working with him.

"He's young, but still has lots of good experience and it's given us all a bit of a lift.

"I've been aware of the potential deal for a while but the injuries we've had maybe sharpened our focus on it.

"But it's nice to get him here and he's been training today, which is positive for us."

Arsenal and Manchester United had been linked with the 23-year-old, whose wages Chelsea will pay in full until the end of the season as part of the loan deal.

"Chelsea is one of the great teams in the world," said Felix.

" I hope to help the team reach their objectives. I am very, very happy to be here and very excited to play at Stamford Bridge."

Atletico made Felix the fifth-most expensive player in history when they paid Benfica £113m for the then 19-year-old in 2019.

He has gone on to score 34 goals in 131 appearances in all competitions, with 18 assists.

Felix was part of the Portugal squad at the World Cup, scoring once in five games as they reached the quarter-finals.

Since then, he has played for Atletico twice, scoring in a 2-0 win against Elche on 29 December before playing 73 minutes in a 1-0 defeat by Barcelona on Sunday.

Felix has scored five goals and provided three assists for Atletico in 20 games this season.

He follows Benoit Badiashile, David Datro Fofana and Andrey Santos in joining Chelsea during the January transfer window, and signs with the club 10th in the Premier League - 10 points adrift of a top-four spot.

They are also out of both cup competitions after losing 4-0 to Manchester City in the FA Cup third round last weekend.

That made it six defeats in nine games in all competitions though boss Graham Potter, who replaced Thomas Tuchel in September, retains the support of the club's board.

It won't take just one person to solve problems - Potter

Chelsea's patchy form has not been helped by a string of injuries to key players this season, with Reece James, Ben Chilwell, Wesley Fofana, N'Golo Kante and Ruben Loftus-Cheek all on the sidelines.

Forwards Pulisic and Raheem Sterling are set to join them after both limped off in the early stages of last week's Premier League home defeat by Manchester City.

"Christian Pulisic is not ready, he is a couple of months away, we think. Raheem Sterling is hopefully less than that," said Potter.

Felix was able to train with his new team-mates on Wednesday but the club are waiting to see if he will receive clearance in time to make his debut against Fulham in the Premier League on Thursday.

Potter is keen to ease the pressure on his new signing, stressing that Felix will not be able turn the club's form around on his own.

"We have to fix the team, there's not just one person who can solve problems. We have to attack better, take our chances," said the former Brighton boss.

"But he's a top player, we know he's talented, there's no doubt about that."

On whether Chelsea will sign more players during this transfer window, Potter added: "There's time. Whether we'll find the right players or not is another thing.

"You have to look in this window to make the right decisions, but it's complicated. We're happy with what we've done so far."