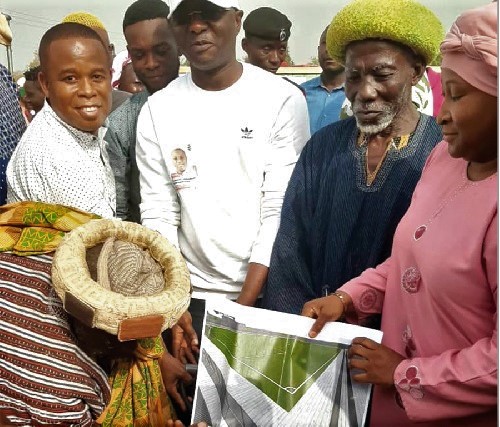 The Deputy Minister of Energy, Dr Mohammed Amin Adam (Anta), has teamed up with the Ghana National Petroleum Corporation (GNPC) Foundation to cut sod for the construction of an 11-a-side artificial turf football field for the Karaga area in the Northern Region.

Mahama Sumani, the Regent of Karaga, led the sod-cutting ceremony together with Lubaabat Habib-Jawulaa, a GNPC Foundation representative, and Dr Adam to break grounds for the Artificial turf football Field construction which will be built by BLAG Ghana Limited.

Speaking at the sod-cutting ceremony last Sunday Dr Adam, who hails from the constituency, lauded the initiative and said he was hopeful the artificial turf football field when built would serve the teeming youth in the area.

He added that the pitch would serve footballers in the community by providing them the best of facilities to nurture their talents.

“I am very happy for this initiative and I believe it will provide footballers with the opportunity to nurture their talents,” he said.

Mr Sumani on the other hand noted that he was grateful to the GNPC for supporting the project which would help unearth and nurture football talents of residents within the Karaga Constituency and beyond.

He however urged residents in the area to properly maintain the facility when completed to help preserve it for future generations.

“This is a good initiative for the people of this constituency which I believe will help unearth and nurture football talents in the community.

A GNPC Foundation representative, Lubaabat Habib-Jawulaa, who represented the Executive Director, Dr Dominic Eduah, explained the Foundations vision to impact lives through education, environmental projects, as well as the provision of social amenities, among others.

For his part, the Chief Operating Officer of BLAG Ghana Limited in partnership with Greenfields B.V Netherlands, Mr. Eddie Dankwa, contractor of the project, revealed that the facility which is expected to transform the pitch at Karaga would serve footballers well within the community.

He noted that the state-of-the-art pitch using FIFA approved quality Pro turf would include fencing and flood lights in order to give footballers within the community the chance to play at night.