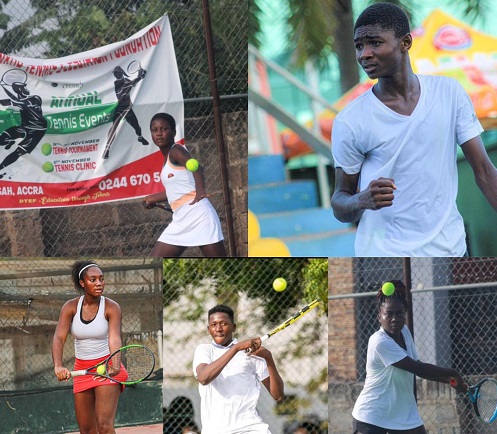 The 2021 edition of the Donkor Tennis and Educational Foundation tournament has begun at Ayi-Mensah, Accra. The tournament will run from November 11-13, 2021.

The three-day event is for players who are under 18 years and the competition will feature boys’ and girls’ singles.

The form of players on the opening day proved that there was yet more exciting tennis to see during the three-day tournament.

Speaking to ghanatennis.org Ghana tennis legend Isaac Donkor said, "I am happy to be back to give to Ghana tennis. I love watching the kids playing competition and have seen some good matches already. When I look at their technique and form I think more can be done".

"I think we should all get involved in lifting the standard of these children, that’s why I am doing this annually. My Foundation will subsequently increase the number of tournaments we host yearly and I am happy other Foundations are also helping".

The tournament started with the girls’ singles as Naa Shika Mckorley progressed to the next with an 8-5 win over Sisu Tomegah. Grace Tomegah redeemed her sister’s shortfall as she outwitted Winneba based Naa Aloena Ankrah 8-3. Tracy Ampah announced her presence with a 9-8(5) win over Vanessa Akuaku.

In the boys’ singles, Richard Okine proved his experience over Aaron Armaah as he won 8-3. Sakumono-based Samuel Nyamekye sailed onto the next round with a 8-3 win over Bright Nortey.

Other results were: Atomic Tennis Club’s Emmanuel Antwi advancing to the next stage after taking out Caleb Aryeetey in a game that ended 8-2.

The rest of the matches are: Abubakari Yakubu Lea facing Raphael Dowuona and the match of the day will be between Sakumono Tennis Club’s Samuel Nyamekye battling against Atomic Tennis Club’s Emmanuel Antwi.