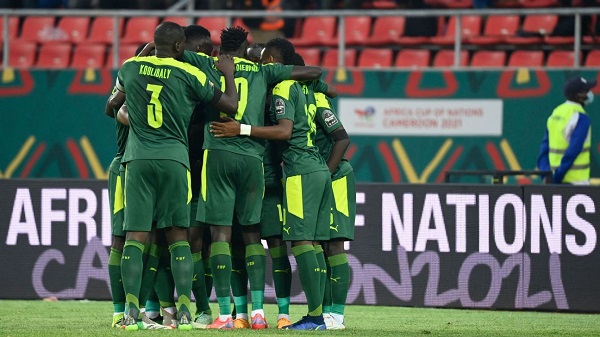 Players of Senegal celebrating their way to the quarter -finals
30.5k Shares

Senegal roared into the quarter-finals of the TotalEnergies Africa Cup of Nations after defeating a nine-man Cape Verde 2-0 at the Stade Omnisports de Bafoussam in a round of 16 match yesterday.

The match was played on the backdrop of a somber atmosphere as the two teams observed a moment of silence ahead of kickoff in memory of the victims of the Olembe Stadium incident which happened last Monday night.
Sadio Mane of Senegal shoots at goal during the 2021 Africa Cup of Nations Afcon Finals Last 16 match between Senegal and Cape Verde in Bafoussam

The Teranga Lions were first to get an opening when Sadio Mane saw his shot come off the post a minute into the game. Cape Verde were already on the back foot and suffered a blow when they were reduced to 10 men, with Patrick Andrade getting a red card.

Very few chances followed as neither side could not find the net in the first period. Papa Gueye had a go in the six-yard box just before half-time but his effort was high.

Senegal continued to press forward in the second half but could not register any shot on target at the hour mark.

The Blue Sharks had a rare chance in the 53 minute with Ianique dos Santos Tavares heading wide. Cape Verde then saw another red card with Josimar Dias taking an early shower. After a VAR check, the red card stood despite protests from the Islanders.

Eventually, Cape Verde cracked and with a shortage in personnel, Sadio Mane opened the scoring with a right-footed effort from a set-piece situation.

Cape Verde coach Pedro Brito in trying to make some tweaks to the team brought on Júlio Tavares in place of Kenny Rocha Santos, and Lisandro Semedo for Ryan Mendes.

Idrissa Gueye had an opportunity to add a second for Senegal four minutes before the full-time whistle, but his attempt went few inches wide.

Cape Verde also had an opportunity to equalise but substitute Julio Tavarez saw his shot saved by Edouard Mendy in the Senegal goal.

Senegal did get their second goal with substitute Dieng scoring in stoppage time to ensure Senegal carry the day in Bafoussam.-cafonline