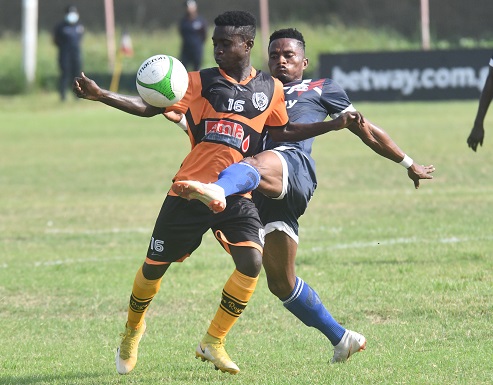 Matthew Cudjoe (left) in a battle with his Liberty Professionals marker
30.5k Shares

Liberty Professionals yesterday deepened the woes of Legon Cities to keep them rooted on the foot of the league log after they were beaten 1-0 at the Dansoman Carl Reindorf Park.

The host had to rely on a late penalty to secure the maximum points against a 10-man Legon Cities side and to consign them to seven games without a win this season.

The 82nd minute penalty which was converted by Abraham Wayo nearly resulted in confusion among supporters of the visiting club, and the police had to shield referee Selorm Kpormegbe from being attacked by some technical team members of Legon Cities.

They had protested what seemed an obvious penalty after Legon Cities centre back, Micheal Ampadu, brought down Liberty’s Godfred Atuahene in the box, leaving referee Kpormegbe with no option than to point to the spot for a penalty.

Liberty Professionals who were looking for their second victory of the season could not capitalise on their numerical advantage when Legon Cities were reduced to 10 men following a second yellow card offence by Fadili Yussif after his dangerous tackle on Wayo in the 42nd minute.

Both sides had played a drab game from the beginning until after the 20th minute when the host created the first opportunity with George Ansong profiting from a defensive lapse but goalkeeper Fatau Dauda spread himself to deny Liberty the opener.

At the other end, it was Ampadu who was put through from the right flank to release a curling cross but goalkeeper Kofi Baah did well to scoop it off the line.

The game came alive afterwards, with Liberty fighting for the opener in the 28th minute when Ernest Danso who was set up from midfield had just the goalkeeper at his mercy but shot wide.

Legon Cities also launched their own attack when Matthew Anim Cudjoe picked the ball from the midfield to quickly locate Jonah Attuquaye who sent in a cross but Francis Addo Nuer arrived too late, and could therefore not connect the ball into the net.

The visitors became overconfident after recess and dictated the pace of the game but could not utilise the chances they created until the 73rd minute when goalkeeper Dauda pulled a brilliant save after a powerful header from Stanley Aniagyei Ampaw.

Afterwards Legon Cities capitalised on the defensive frailty at the right back and launched many attacks, using Attuquaye but those incursions did not yield the desired results.