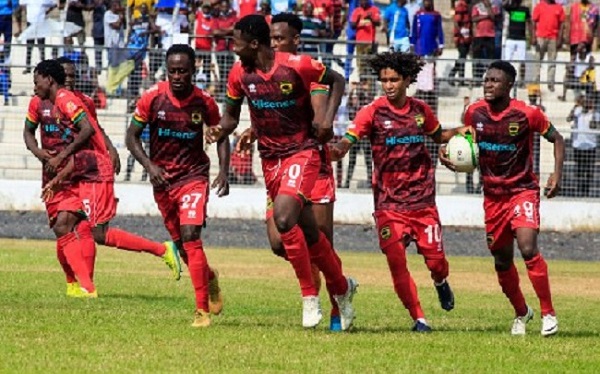 League leaders, Kumasi Asante Kotoko, will seek to create clear water between them and second-placed King Faisal when they trek to the Golden City Park tomorrow to face Berekum Chelsea in a 13th week Ghana Premier League fixture.

The Porcupine Warriors are currently high-flying, having won their last four matches since losing to King Faisal on December 5.

Coach Prosper Narteh Ogum’s charges have 26 points from 11 matches, three more than King Faisal who have played a match more than the leaders.

In Kotoko’s last encounter against local rivals, Ashantigold in Kumasi last Sunday, Camerounian import, Franck Mbella, netted three times to give the Fabulous club some breathing space at the top. The feat was important for Kotoko who often find the Obuasi lads a tough nut to crack.

The Golden City Park used to be a fortress for Berekum Chelsea but not anymore. It has now become a place where Chelsea have to either struggle for a draw or loss.

Coach Solomon Odwo joined the Berekum lads recently as head coach and is struggling to make an immediate impact.

Against Kotoko, the task may be arduous in the face of free-scoring Mbella and his compatriot Mfegue Omgba, as well as Isaac Oppong and others.

Chelsea, now 14th with 13 points, are a loss away from joining the relegation bracket. Therefore, falling to Kotoko at home would be their last wish.

This afternoon, King Faisal will welcome Karela United to the Baba Yara Stadium in a bid to secure the three maximum points and close in on Kotoko.

And on Sunday at the Nana Agyemang Badu I park, unpredictable Aduana Stars are favourites against visiting Accra Lions, while the Obuasi Len Clay Stadium will be another hotspot for Elmina Sharks as they play as guests of Ashantigold.

Other Sunday battles will see Techiman Eleven Wonders trekking to Accra to meet Hearts of Oak at the Accra Sports Stadium, while Real Tamale United host Bibiani Goldstars at the Aliu Mahama Stadium in Tamale. Medeama, who beat Hearts 1-0 in midweek, will host bogey side, Great Olympics, at the Akoon Park at Tarkwa.

At the Theatre of Dreams on Monday, Legon Cities face a tough assignment against Bechem United.