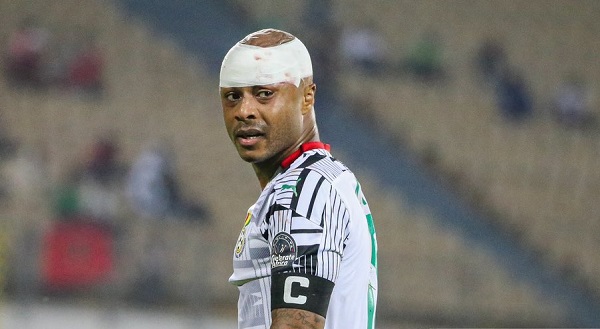 The Captain of the Black Stars, Andre Ayew, issued the strongest hint of intent last Friday, giving an assurance that the Black Stars would win tomorrow’s group clash with The Comoros to advance to the next round of the Africa Cup of Nations (AFCON) tournament.

After a painful draw with Gabon, which put pressure on the Ghanaians to win the last Group C match to guarantee qualification, the experienced midfielder said the team would live up to their reputation in African football.

“We are Ghana; we are going to win the last game and go through,” Ayew, whose beautiful goal gave the team a first half lead before the Gabonese snatched a late draw from the jaws of defeat in Yaoundé last Friday, said.

Ghana have just a point from two matches at the tournament, following a 0-1 defeat to Morocco and the 1-1 stalemate with Gabon last Friday.

Tomorrow's clash at the Roumde Adja Stadium in Garoua is, therefore, a make-or-break affair for Ghana's AFCON campaign, as the team cannot risk a loss to the Les Coelacantes of The Comoros.

Coach Milovan Rajevac’s side had a recovery training session at the Stade Ahmadou Ahidjo Annex last Saturday before flying out of Yaoundé to the northern Camerounian city of Garoua yesterday to continue preparations for their final Group C clash against The Comoros.

The stakes are high for the Stars, who will exit the tournament if they fail to beat The Comoros that have nothing to lose tomorrow.

However, Coach Rajevac was hopeful that his team would pull through to the next stage of the tournament, despite the poor start to their AFCON campaign.

“Lack of concentration in the final minutes affected us when we played against Gabon, but we have to stay strong to qualify. I am confident a win in our last game will see us through to the next round of the competition,” the coach said.

Sources close to the team have revealed that the coach will effect changes to his starting line-up, as the team looks to produce a masterclass against a Comoros side that lost their opening two matches in the group.

When the Graphic Sports visited the team’s camp last Saturday, most of the players were in high spirits and gave assurances that they were ready to put their lives on the line for the Stars to triumph in Garoua.

“We are not happy with the results so far, but we have to keep working hard to beat The Comoros on Tuesday. We are confident we will go through.

“As you can see, we are not down and morale in camp is very high because we know what we have to do to get it done on Tuesday,” a source told the Graphic Sports.

Ghana are yet to record a win in Cameroun, having failed in their two matches against Morocco and Gabon.

Coach Milovan Rajevac is expected to make changes to his team against The Comoros, with the Serbian looking at giving other players the opportunity to play.