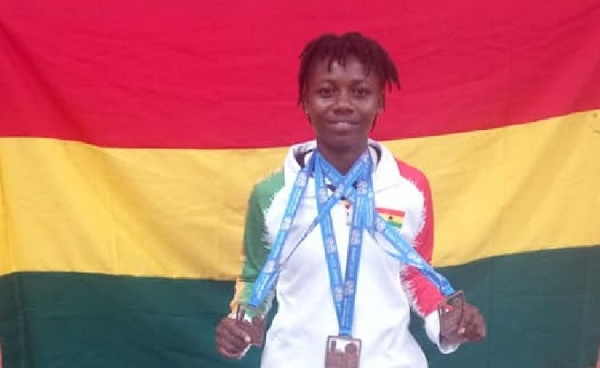 Ace weightlifter, Winifred Ntumy, who won three bronze medals at the 2019 African Games, has threatened to quit the sport if she fails to get a job.

Speaking to media men, Ntumy stressed the need for the Ministry of Youth and Sports and the National Sports Authority (NSA) to employ or find employment for the nation’s athletes to keep them active in sports and also guarantee them a meaningful source of income.

She said without employment, she might be compelled to quit and find a job outside the sport to cater for herself and her family, adding that the pressure to find means of survival was huge.

According to Winnie, though she loved to do sports, the motivation and inspiration from the authorities were absent.

“As a weightlifter, I have to get good nutrition and sound mind to train, but I sometimes feel sad and want to quit. But when I think of people like Ben Nunoo Mensah, (chairman of the Ghana Weighlifting Federation) who has over the years motivated me to keep on I changed my mind,” she revealed.

“I do not understand why footballers in the national team are given better care than boxers, athletes, and other sportsmen and women. If it gets worse, I would have no choice than to stop and look for a job elsewhere,” she lamented.

She, however, praised Mr Nunoo Mensah, who doubles as the Ghana Olympic Committee (GOC) President, for taking care of her over the years.

Ntumy, who won Ghana’s first medal at the 2019 African Games and went on to grab two more later, said she had to train harder to get silver or gold when the next African Games was hosted by Ghana in 2023.

“It’s not easy at all; now we are only two females doing serious weightlifting, but we are not inspired at all,” she noted.
She called on the government to support national athletes, especially after competitions.-GNA