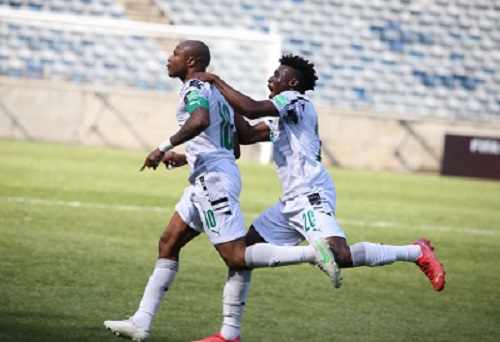 Ayew’s 33rd minute winner from the spot ensured a hard-fought 1-0 victory for the Stars to help  Ghana top Group G with a superior goal advantage despite tying on 13 points with South Africa.

Ghana and South Africa were level on both points and the head-to-head rule but the Ghanaians managed to sail through with superior goals.

In a half where Jordan Ayew and Daniel Kofi Kyere missed two golden opportunities, Andre sealed victory for the hosts with a deserved match winner to the admiration of the yelling home crowd

Ayew slotted home a delicate kick after defender Daniel Amartey was fouled in the box by South African defender, Rushine De Reuk, during a goalmouth melee.

The highly-determined Black Stars side opted to search for an early lead right from the opening whistle and came close to scoring in the first six minutes but Mohammed Kudus saw his two freekicks missing target.

Three minutes later, the Ajax midfielder was replaced by Kyere after sustaining a muscle injury.

In the 14th minute, Jordan missed the Stars’ first clear opportunity at goal when he failed to bury the ball from close range.

Moments later, Kyere was also provided with a fine opportunity by Ayew’s splitting pass but the St Pauli forward missed the chance in a one-on-one situation.

Ghana held on to their possessive play and kept searching for the opener which paid off in the 31st minute.

Kyere’s corner kick was well defended by the Bafana Bafana defence but Amartey’s attempt to score from the rebound was challenged by Slyanda Xulu in the box.

Senegalese referee, Ndiaye Maguette, who was close to the scene whistled for a penalty for Ayew to set the Cape Coast stadium alight.

The Stars continued from where they left off in the second half and Baba Rahman was fouled after a dangerous run on the left just after recess. However, goalkeeper Rowen Williams of South Africa made a comfortable save from Jordan’s free kick.

The South Africans also came in strongly seeking for the equaliser but Percy Tau’s dangerous run in the 57th minute was dealt with by the Ghana defence.

Ghana again came close to scoring in the 64th minute but a miscommunication between the Ayew brothers wasted a fine cross by Kamal Deen Suleimana.

Tau continued his brilliant display by giving the Stars’ defence a tough time but goalkeeper Joseph Wollacot denied him in the 67th minute.

The Bafana Bafana nearly punished Ghana’s defence after a miskick by Djiku in the 72nd minute but Amartey was on hand to save the situation.

Ghana held on to their lead with a commanding display and nearly added a second goal when Suleimana dribbled on-rushing Williams but his long range shot narrowly missed the post with 12 minutes to end the game.

The South Africans threw in everything to get the equaliser but a determined Stars side maintained Ghana’s 20-year home dominance in FIFA World Cup qualifiers to sail through.