Fans to return to stadia—FA 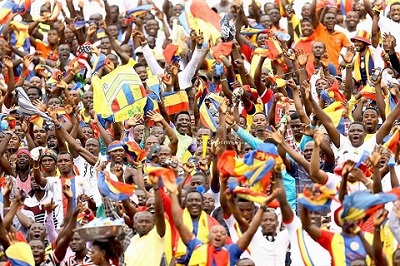 The Ghana Football Association (GFA) has given the green light to clubs whose stewards have successfully undergone training to admit fans to the stadium effective April 2.

The Premier League which went on break after end of the first round of matches is expected to resume on April 2 with fan after clubs were sanctioned from admitting fans due to non compliance to the COVID-19 protocols.

However after a meeting by the Executive Council it was decided that clubs who submitted reports to the FA after meeting the requirement are now allowed to admit up to 25 per cent capacity as granted by the government.

A statement issued by the communications bureau of the football association said the aim was to protect fans and ensure the social distance protocol was properly observed.

“Club Stewards are to fully implement what they learnt and ensure strict adherence to the GFA Matchday Covid-19 Protocols.

“Having trained the clubs and their Stewards, the GFA will apply stiffer sanctions if Clubs fail to adhere to the provisions of the GFA Matchday Covid-19 Protocols”, the statement noted.

The FA, however, urged clubs who were yet to complete the training of their stewards to continue to play in an empty stadium until they have been given the green light to do so and warned defaulters would be sanctioned severely.

“The Association wishes to state clearly that having invested in the trainings and seminars on safety and security for a clean football, the appropriate Bodies and Committees of the GFA will not hesitate to apply the prescribed sanctions severely and swiftly should Clubs or Match Officials or any Club Officials or Supporters violate the Matchday Covid-19 Protocols and Regulations of the Association”, the statement said.