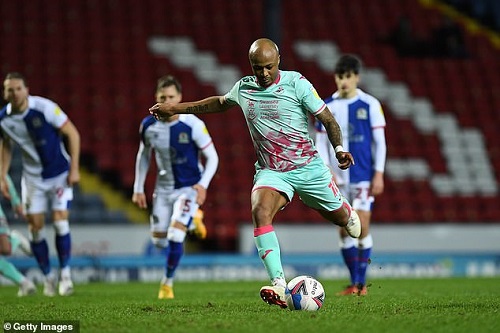 Having kept his cool to stroke in controversial injury-time winners versus Stoke and Middlesbrough over the previous week, that boosted the Welsh club’s hopes of a return to the top flight via the automatic route, he made a much earlier intervention to seal the draw that took them level on points with second-placed Watford with a game in hand.

It was the Ghana international striker’s fourth successful from the spot in as many matches, and his fifth goal in that sequence all told, but Swansea could not add to it against a team that have tumbled down the Championship since the new year.

Ayew was presented with yet another chance from 12 yards when referee Robert Jones penalised Sam Gallagher’s felling of Jay Fulton in the area just three minutes after Blackburn had taken the lead.

The 31-year-old will have struck more convincing ones than the left-footed effort down the middle that Thomas Kaminski got a glove on before it ripped the net.

But it sent the teams in level after Bradley Dack had struck once again following his opener in Saturday’s win at Millwall - the Lancashire club’s first in eight matches.

Blackburn had just squandered the chance to take the lead when Sam Gallagher scuffed his shot with just Freddie Woodman to beat.

Dack did not pass up such an opportunity, however, slotting between Woodman’s legs from eight yards from Tom Trybull’s assist.

Swansea, seeking a first win at Ewood Park for 50 years, believed they should have had a penalty on the half hour when Connor Roberts’ long throw ricocheted off a couple of Blackburn defenders but Jones waved their appeals away.

But they should arguably have been journeying back down the M6 on the back of a defeat after Ben Brereton squandered a straightforward chance three minutes into the second half.

He beat the off-side trap to race clear on the right but his lob of the advancing Woodman drifted wide.