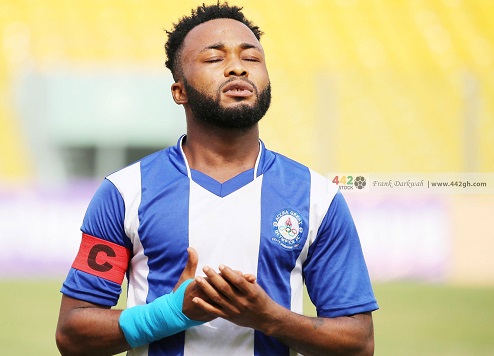 A VETERAN football administrator, Jonathan Abbey Pobee, has waded into the transfer controversy between city rivals, Great Olympics and Hearts of Oak, regarding midfielder Gladson Awako, insisting that the former has no hold over the player.

Hearts signed Awako for a transfer fee of GH¢100,000 a few months ago and made an initial deposit of GH¢50,000 per the terms of the contract. The Phobians were supposed to pay the balance by October 2, 2021, but failed to honour that contractual obligation, compelling the management of Olympics to demand the return of the player prior to the commencement of the 2021/2022 Ghana Premier League.

Olympics, in their determined bid to wrest Awako from Hearts, have since petitioned the Player Status Committee of the Ghana Football Association (GFA) to grant them a special dispensation to enable them to register Awako to feature in the ongoing League season.

According to the Chief Executive Officer (CEO) of Olympics, Mr Oloboi Commodore, his outfit is eagerly waiting for a response to the petition which was submitted to the committee seeking for the release of Awako back to Olympics.

“We have asked the committee to enforce the contractual agreement between Olympics and Accra Hearts of Oak on the transfer of Awako to enable the player play for Olympics this season,” Mr Commodore told the Daily Graphic in an exclusive interview last Tuesday.

According to Mr Commodore, the club submitted the request to the FA on October 19, adding that the player had already started training with Olympics to put him in good shape.

“Just like Olympics, Awako is also waiting patiently for the Status Committee to respond positively to our request for him to have the peace of mind to concentrate on his training ahead of next season’s league,” Mr Commodore noted.

However, reacting to Olympics' request in an exclusive interview, Mr Pobee told the Graphic Sports that, “Olympics have no case as far as Awako’s transfer saga is concerned.”

Touching on the prospect of Awako playing for Olympics in the 2021/2022 league, Mr Pobee stated: “It cannot be possible because he had already committed himself by signing a contract to play for Hearts.”

He explained that under FIFA regulations, all transfers involved three key partners - the player, his club and the club seeking his services. He said in Awako’s case, the player failed to honour his part of the contract before Hearts failed to pay the remaining GH¢50,000.

“Why should Hearts pay the additional GH¢50,000 when the player they are seeking has refused to train or provide the services required from him?” he asked.

“Although that clause of paying the GH¢50,000 on a particular date was in the contract, per FIFA regulations, transfer of players has three key parties, so if the player fails to fulfil his obligations as far as the contract is concerned, Olympics cannot enforce the details of the contract as they are claiming,” Mr Pobee emphasised.

"The FA cannot free Awako to enable Olympics register him for the league because the player failed to fulfil his contractual obligations as enshrined in the contract,” Mr Pobee stressed.

The former chairman of the defunct Neoplan Stars was also of the view that Hearts would win the case at the Status Committee level and if Hearts decide to send the case to FIFA, Awako is likely to be banned; hence, the need for Olympics to tread cautiously to safeguard the career of the player.

"In case Awako is banned when it gets to the level of FIFA, how can they (Olympics) claim Awako as their player, or make a claim for their remaining money?” he asked.