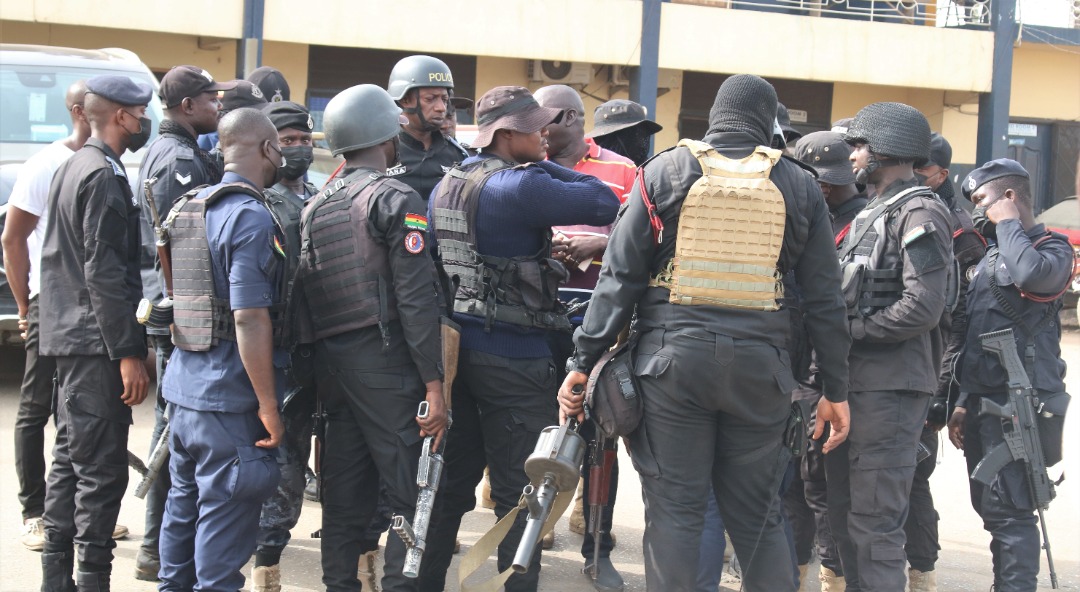 The Tema Regional Police Command has explained why it stopped the Convenor of the #FixTheCountry Movement, Oliver Barker-Vormawor from donating food items and toiletries to inmates at the Ashaiman Police Station last Sunday.

Barker-Vormawor is currently facing a treason felony charge at the Ashaiman District Court.

He is on a GH¢2million bail granted him by the Tema High Court with two sureties.

On Sunday [March 20, 2022], he attempted to donate food items and toiletries to cell inmates, with whom he spent about a month, having been on remand in police custody from February 14 to March 17, 2022, but the police prevented him from doing so.

He claimed the move was a kind gesture from him. 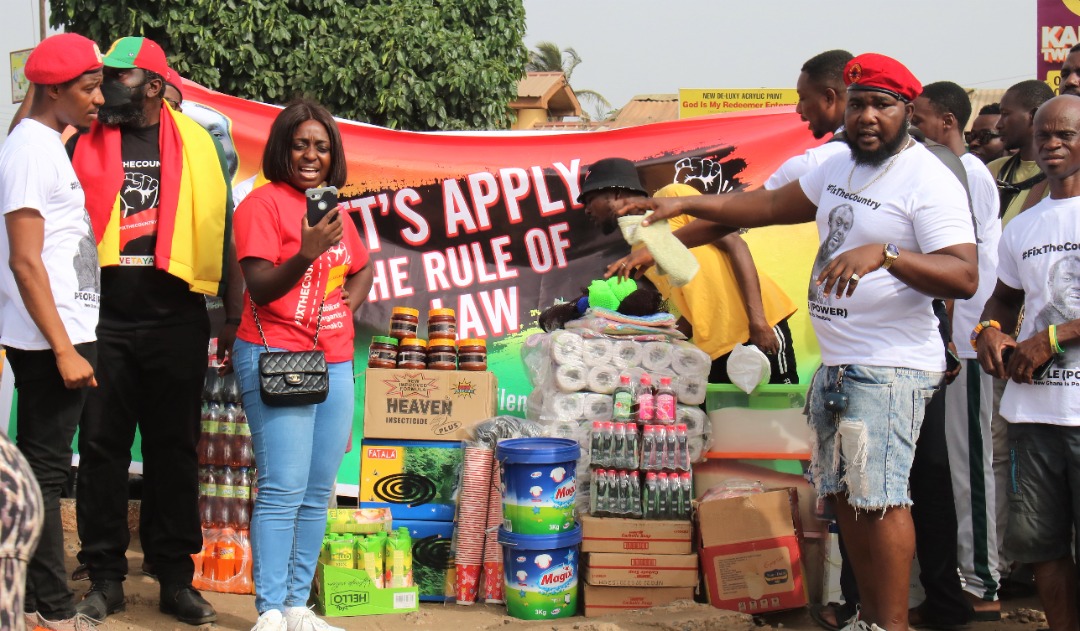 In a statement, the police said the move was against Police Standard Operating Procedure (SoP) on the feeding of persons in Police custody.

This, the police said had earlier been communicated to Barker-Vormawor through his lawyers but he still went ahead to picket at the Ashaiman police station with the intention of donating the items.

A statement dated March 20, 2022, signed and issued by the Public Affairs Officer for the Command, Chief Inspector Stella Dede Dzakpasu said Barker-Vormawor was informed through his lawyers when the Command got to know about the intended donation via social media platforms.

“In spite of the notice given him, he [Barker-Vormawor] showed up at the station in the company of some individuals and a musical band with the obvious intention of making the donation and also to create unnecessary drama,” the police stated.

The Police, Chief Inspector Dzakpasu said had no choice but to refuse him the opportunity, and “after loitering at the station for a while amidst noise making and inconveniencing other persons, at the station, the group finally left,” she said.

The statement described the claims by Barker-Vormawor as being called back to take back some of the items donated as a result of an order from above as false, urging the public to disregard it.

Ms Dzakpasu stressed that, the feeding of persons in custody is the responsibility of the government, and “it’s a responsibility that is discharged according to law and laid down procedure, however, due to our cultural sensitivities and arrangements, families of suspects usually are allowed to provide food to them from time to time”.

The statement continued that in line with procedures, food items brought to suspects in custody are subjected to stringent safety and security protocols before being accepted and given for consumption, since the police are held accountable for whatever happens to persons in custody.

Chief Dzakpasu emphasised that whereas the Command may not know what the true intentions of Barker-Vormawor was since feeding suspects in custody is hardly an enterprise he can sustain even for more than a day.

The police urged the public to disregard what it said were antics aimed to court public attention by Barker-Vormawor.

Barker-Vormawor and his group had procured toiletries, mosquito coils, first aid medication and food items made of 40 bags of sachet water, black pepper, gari, sugar, and fruit juices among others for the use by inmates currently in police custody for various offences.

Barker-Vormawor had in a Facebook post announced the donation following what he described as inmates surviving on the benevolence of people who visited their fellow inmates from time to time.

“The state does not provide food for persons arrested and kept in cells no matter how long they are held and some have to wait as long as three years awaiting trial,” Mr Vormawor said in the post.

He added that, while in cells, he met people who had not eaten for three to five days and when I protested the fact that people go days without eating, I was told “they are used to it”, he alleged.

When he got to the Ashaiman police station, the police prevented him from presenting the items.

A reinforcement team was called in to ward off the group from the area, reports Della Russel Ocloo.

A brass band that had pitched camp within the vicinity providing music were moved from their location by the police who barricaded portions of the roads in front of the station while driving away some members of the group and regular commuters and traders.

Barker-Vormawor who claimed he has been engaged by some inmates who have been on remand without trial for months to provide them legal services subsequently sought permission to visit the said clients, however, the police reinforcement team quickly surrounded him and another Convenor, Ms Felicity Nelson when they attempted to walk to the station, Della Russel Ocloo reported.

One of the policemen who wore a hood covering his entire face leaving just his eyes was  heard screaming, “We say we are not allowing you to visit anybody, is it by force,” while preventing him from walking through the human shield they have formed around him. 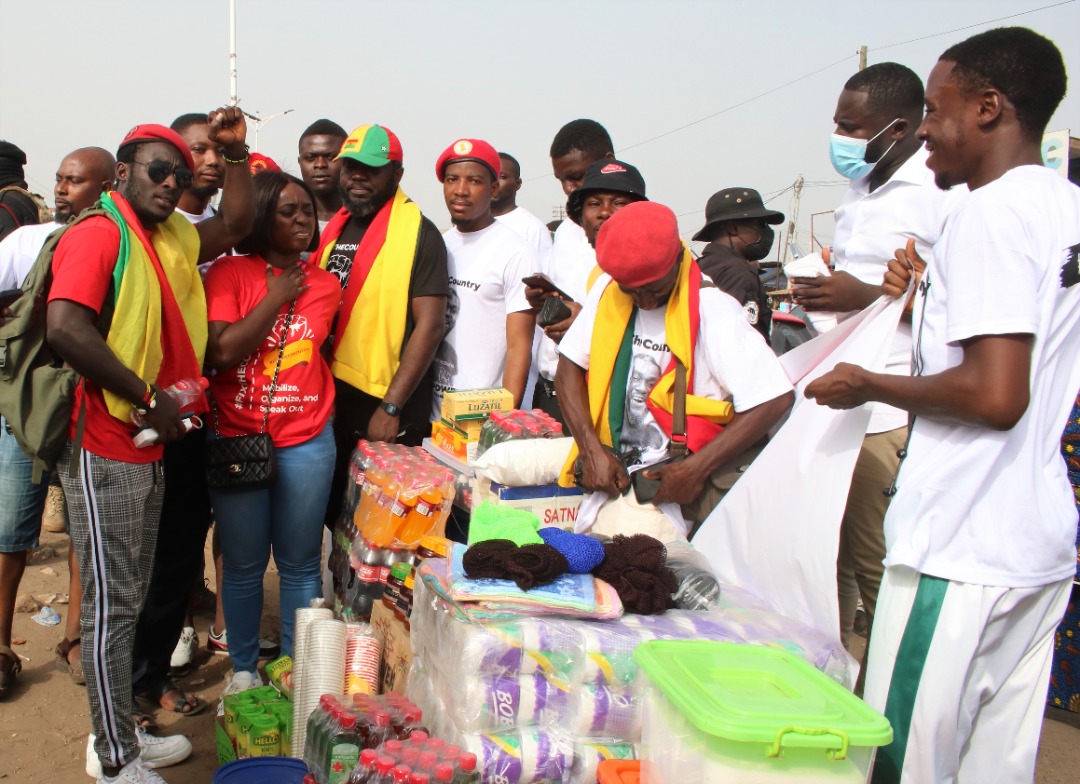 Barker-Vormawor in an interaction with the media expressed disappointment at the development, saying the decision of the group to donate the items was a matter of public knowledge and that he had in fact informed the Police hierarchy, including the Regional Commander about it.

He said, the Movement only got a message that the police was no longer prepared to receive the items, late afternoon.

The group, he pointed out indicated surprise that they had been asked to come back for 40 bags of sachet water which were sent to the Police station earlier in the day and received by a Policeman prior to the arrival of the group with the rest of the items.

“As to why people who are in detention and are hungry but being denied food, I don’t know, because during my incarceration, not once did the police offer me or any of the other inmates food,” Barker-Vormawor alleged.

Asked what will become of the rejected food items, Barker-Vormawor said that a number of orphanages within the Ashaiman area have come up for consideration to become beneficiaries of the items and the group will decide on which among the three they will donate them to. 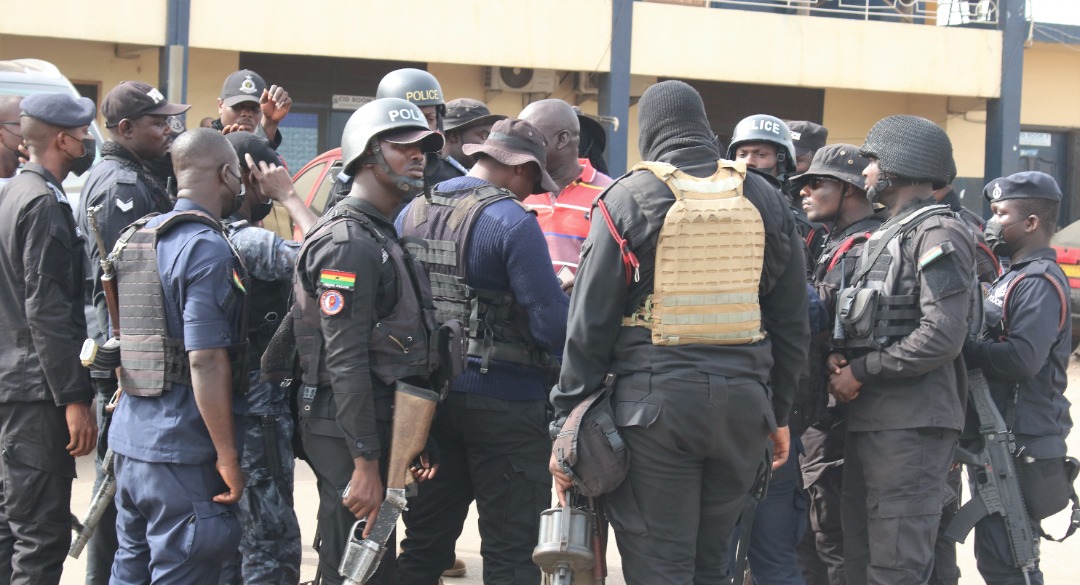 Barker-Vormawor, a PhD Law student at the Cambridge University in the United Kingdom was arrested by the police on February 11, 2022 at the Kotoka International Airport (KIA) when he arrived in the country over social media posts, in which he alleged he will stage a “coup”.

He posted on Facebook that, “If this e-levy bill is passed, I will do the coup myself”.