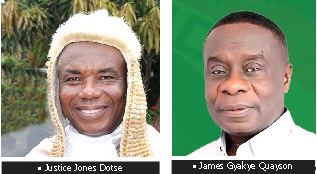 The Supreme Court will today decide whether or not to stop James Gyakye Quayson from holding himself as the Member of Parliament for Assin North.

A seven-member panel of the court will rule on an injunction application seeking to restrain Mr Quayson from holding himself as a legislator until the final determination of a suit challenging the constitutionality of his election.

The panel that will rule is presided over by Justice Jones Dotse and has Justices Agnes Dordzie, Nene Amegatcher, Mariama Owusu, Gertrude Torkornoo, Prof. Henrietta Mensa-Bonsu and Emmanuel Yonny Kulendi as members.

The injunction application was filed by a constituent of Assin North, Michael Ankomah-Nimfah, who secured judgment from the Cape Coast High Court nullifying Mr Quayson’s election on the basis that he held a Canadian citizenship at the time he filed to contest the seat.

The applicant argues that despite the judgment of the Cape Coast High Court, Mr Quayson continues to parade himself as a sitting MP.

With the substantive suit, Mr Ankomah-Nimfah is seeking a declaration from the apex court that upon a true and proper interpretation of Article 94(2)(a) of the 1992 Constitution, at the time the EC opened nominations for people to file to contest the Assin North parliamentary seat, Mr Quayson was not qualified to contest.

Again, he is urging the Supreme Court to declare the entire process that led to Mr Quayson’s election as MP for Assin North as unconstitutional and, therefore, null and void.

Making a case for the injunction at the court’s hearing on April 5, counsel for the applicant, Frank Davies, argued that the High Court had clearly established that Mr Quayson was not qualified at the time he filed to contest the Assin North seat.

He further submitted that an appeal filed by the MP had also been struck out by the Court of Appeal and, therefore, allowing Mr Quayson to hold himself as a legislator would be an “egregious breach of the constitution and the electoral laws of Ghana”.

In response, counsel for Mr Quayson, Tsatsu Tsikata, contended that the injunction application violated the Supreme Court Rules, 1996 (C.I 16) and decided cases of the court.

It was his submission that the injunction was provided for under the High Court Rules (Civil Procedure) Rules, 2004 (C.I 47) and therefore if the applicant wanted to file for an injunction, he ought to have sought direction from the Supreme Court before relying on C.I 47.

The court upheld the petition, and on July 28, 2021, following that petition by Mr Ankomah-Nimfah, the Cape Coast High Court declared Mr Quayson’s election as void, on the basis that he owed allegiance to another country other than Ghana, contrary to Article 94(2) of the 1992 Constitution.

The MP filed an appeal at the Court of Appeal, Cape Coast, but on March 22, the second highest court of the land struck out the appeal for not being in compliance with the rules of court.