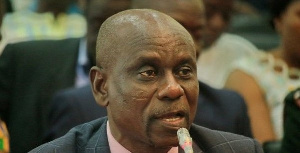 The Deputy Minister of Defence, Major (rtd) Derek Oduro says the criticism over the offer of 200 police personnel as personal protection for Members of Parliament (MP) lacks merit.

To him, the media was deliberately inciting the public against MPs, by setting the agenda that it was unnecessary to provide personal police protection for MPs.

He said the media was setting the agenda “as if we [MPs] are from Afghanistan, as if we are from Congo River basin, who have been brought to come and put up here [Ghana] to serve the nation.”

“Meanwhile you voted for us [and] you are supposed to love us, get us closer to you but you hate Parliamentarians and it is partly because some of you the media, you incite the general public against us, we must be frank. So the Interior Minister is saying that, yes they have enough police people to provide security for MPs and provide security for the whole of nation, how many MPs, do you want them to be killed before we ask of personal security for MPs,” Major (rtd) Oduro who is also the MP for Nkoranza North said in a media interview on Wednesday in Parliament House.

“I don’t think you are happy that our brother [Ekow] Kwansah [Hayford] has been killed, or you are shedding crocodile tears,” he added.

When he was prompted on concerns being raised by some security experts that we don’t have enough police personnel for that personal MP protection move and that the concentration should be on providing security for all Ghanaians, Major Oduro retorted, “I don’t want to hear security experts, I am also a security expert.”

Following the killing of the Mfantseman MP in a robbery attack last Friday, MPs renewed the call for them to be provided with personal police protection.

Last Tuesday, the Minister of Interior, Mr Ambrose Dery announced in Parliament that his outfit has assigned 200 police personnel to provide personal protection for MPs.

He said an additional 800 men, were to be made available for other duties in Parliament and in the homes of MPs as well.

Following that announcement, there has been some public criticisms with some arguing that operational police work in terms of visibility and patrol duties will be greatly affected.

But reacting, the Nkoranza North MP said, “what work have they [security experts] done?”

“I am saying that they [police] are visible all over the place. The Interior Minister is saying that he has no problem, you the security expert you are sitting somewhere and saying we have a problem. I am saying that 200 doesn’t cause any harm to the police authorities. They are there and they are saying they don’t have any problem, you are sitting somewhere and you saying I’m a security expert and they have a problem.”

Major (rtd) Oduro said the duty of the MPs was to enact laws and make sure that the government sits up and make sure that everybody gets adequate protection and when something happens. “we [MPs] haul them to Parliament to come and answer, that is our responsibility.”

Asked if there was the need to enact laws to make that arrangement permanent for other people in other areas such as university professors whose lives may be under threat and would equally need personal police protection, Major (rtd) Oduro said: “bring it, bring the idea, you [media] are okro mouth, okro mouth, okro mouth in the sense that whatever come into your mouth you will throw it out, so let it come out of your mouth that yes, Parliament, make laws, that university professors must be given security.”