NDC candidate for Hohoe constituency, others seek Supreme Court review of its decision 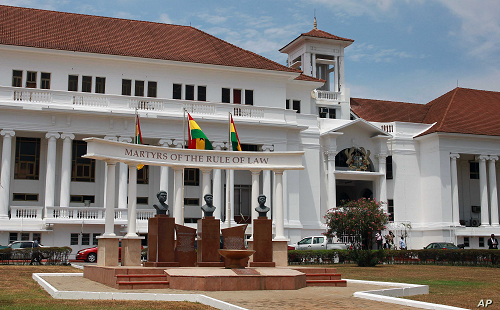 The National Democratic Congress’ (NDC) parliamentary candidate for the Hohoe constituency in the Volta Region, Professor Margaret Kweku, and four others on Tuesday, January 12, 2021 filed an application at the Supreme Court seeking a review of the court’s decision of January 5, 2021 to quash certain orders a High Court in Ho made on December 23, 2020, including an order to restrain Peter Amewu from holding himself out as Member of Parliament-Elect for the Hohoe Constituency.

The 44-page application filed at the Supreme Court contains eighteen grounds alleging fundamental error of law. It was filed by Emile Atsu Agbakpe, solicitor for the applicants.

A press statement issued by the Hohoe Constituency of the NDC on Tuesday, January 12, 2021, signed by the party's Constituency Chairman, George Bright Anni Bansah, observed that the solicitor for the applicants has written to the Registrar of the Supreme Court to ask for an expedited hearing of the review application.

Click here to read the Review Application in full (pdf)

Professor Margaret Kweku, NDC Parliamentary Candidate for Hohoe Constituency and the four other Interested Parties have today filed an application in the Supreme Court seeking a review of the court’s decision on 5th January 2021 to quash certain orders a High Court in Ho made on 23rd December 2020, including an order to restrain Peter Amewu from holding himself out as Member of Parliament -Elect for Hohoe Constituency. Eighteen grounds of fundamental error of law have been set out in the application. A 44-page Statement of Case filed by the Solicitor for the Applicants, Emile Atsu Agbakpe, sets out the submissions in favour of a review.

The second ground of fundamental error for which reason a review is being sought is that as the High Court, Ho has jurisdiction to enforce human rights and was exercising that jurisdiction, the Supreme Court should not have invoked its supervisory power against the Court.

Among other things, the review application takes issue with the court dismissing the objection raised against the participation of Justice Hoenyenugah on account of the real likelihood of bias and actual bias arising from the Justice’s long-standing close relationship with Mr. Amewu and the “unbreakable bond” between them. According to the submissions in the Statement of Case, the Justice should not have participated in the determination of the objection as that amounted to being a judge in his own cause. The Applicants also say that since it is clear from the processes filed in the High Court, Ho, that Mr. Amewu’s declaration by an official of the Electoral Commission as MP-Elect was being challenged on account of the denial of the right to vote to voters in the SALL area who fall within the Hohoe constituency pending the creation of a new constituency for them, the Supreme Court fundamentally erred when it claimed that the action in the High Court, Ho, was really only against acts of the Electoral Commission and not about Mr. Amewu.

Another fundamental error pointed out in the application for review is the court saying in one breath that “…the wrong orders of the trial High court made on 23rd December, 2020, died a natural death by the close of 2nd January 2021 and has (sic) long been buried. So, in effect, as of today 5th January 2021, there are no subsisting orders of the trial High Court to be brought to this Court to be quashed” and, in another breath, ordering that “the entire proceedings of the High Court, Ho dated 23rd December, 2020, which led to the making of the void orders of mandamus and injunction, be brought to this Court for the purpose of same being quashed, and are hereby quashed.”

The concluding part of the Statement of Case for the Applicants reads as follows: “Each of the grounds of our application for review have been established and the Court should, in the interests of justice, review its decision of 5th January 2021” allowing the case in the High Court, Ho, for the enforcement of the fundamental human rights of the Interested Parties “to run its course. The Respondents therein, including Amewu and the Attorney-General, have every opportunity to present their case to that court."

The Solicitor for the Applicants has written to the Registrar of the Supreme Court asking for an expedited hearing of the review application.