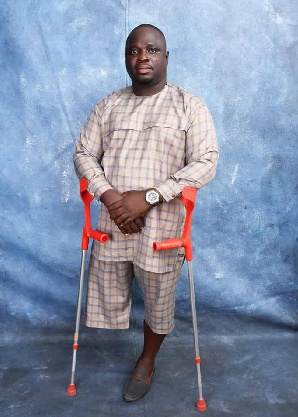 Describing Mr. Makubu’s appointment as a big motivation persons living with disabilities (PWDs), Mr. Nyame said the move would help to eliminate some cultural and social stereotypes and discrimination against PWDs.

Mr. Makubu, an advocate and a person living with disability himself was on Thursday, January 21, announced as a Regional Minister designate for the Oti Region, pending approval from Parliament.

In an interview with the Daily Graphic, Mr. Nyame, who was elated by the announcement, said the opportunity offered Mr Makubu demonstrated that the country had the welfare of PWDs at heart.

“To the best of my knowledge, no President in the Fourth Republic has offered any person living with disability the opportunity to serve as a minister. This is a big boost for the disability community and I sincerely commend the President for setting such a good example,” he said.

Mr. Nyame further appealed to the President to continue to prioritise the welfare of PWDs because “many of them possess special skills and qualities that could be exploited to advance the development of the country.”

He also called for a strict enforcement of the Persons with Disability Act, 2006 (Act 715) to help address critical issues that undermine the rights and welfare of PWDs in the country.

While congratulating Mr. Makubu on his appointment, he urged him to “be a shining example for the PWD community” and work to advance the development of the Oti Region.

He expressed confidence that Parliament would approve his nomination “because he is competent and fit for the office.”

He also appealed to Mr. Makubu to use his office to advocate and push for key government interventions to support PWDs especially in the areas of human rights, justice, and poverty eradication.

“I expect him to use this position to help address some critical issues affecting PWDs. He should be a shining example for them and work to prove his critics wrong. I have every confidence in him that he will succeed,” he said.