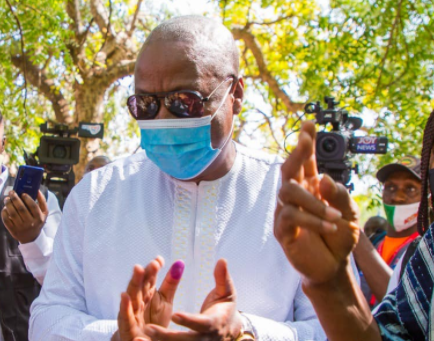 The Electoral Commission (EC) has announced that the bodyguard of the Presidential candidate of the National Democratic Congress (NDC) has voted after he initially struggled to find his name on the voter's register at the District Office Polling Station in Bole-Bamboi Constituency.

The EC in a press release said the bodyguard, Mr Tahiru Bombi Bakari struggled to find his name because he provided it in a wrong sequence and did not have his voters identification card on him.

"Our attention has been drawn to a news article of the National Democratic Congress (NDC) Presidential Candidate, former President John Mahama, following an interview granted in Bole. In the said interview, the former President made the assertion that his bodyguard was not on the Voters Register and had not voted," the release said.

"The Commission takes note that former President Mahama has corrected this assertion.

"The bodyguard, Mr. Tahiru Bombi Bakari, voted at the District Office Polling Station in Bole-Bamboi Constituency. This was after the Name Reference List Officer was able to trace his name in the Voters Register following several attempts due to Mr. Tahiru not having his Voters ID Card on him and providing his name in a different sequence from that on the Register".

Mr Mahama who had briefed pressmen about the struggles of his bodyguard and another woman with regard to finding their names on the register has corroborated the EC's account in a Facebook post.

He posted: "Many thanks to the Presiding Officer at the Bole District Assembly Polling Station. The issue with my security officer has been resolved and he has voted".

In an interview after voting today, Mr Mahama expressed worry that two persons including one of his security officers who had registered at the polling station could not find their names on the voter register.

He also stated that it was too early to make an assessment of the electoral process so far.

"It's too early to make an assessment but there are a few hitches... There is a lady here (polling station), she's got her card from this station but her name is not on the list," Mr Mahama said.

"One of my security personnel, I registered here with him and during the exhibition, we checked his name was there but we got here today his name is not there and so I don't know if it's a generalised problem but like I said it's too early to make an assessment.

"We are waiting to find out what the presiding officer would say and we hope that they can rectify it but these are some of the little things that we kept complaining about. I mean the Electoral Commission said they had eliminated 30,000 names from the register without saying whose names they were and I said that on the day people are going to come without knowing that their names have been taken off...".