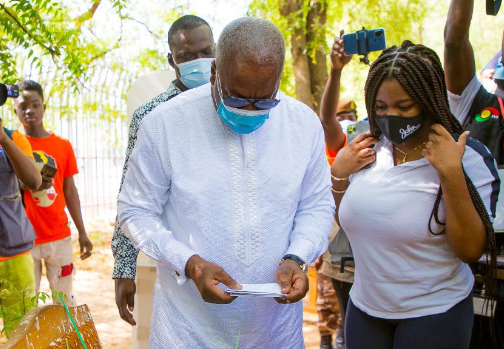 The Presidential candidate of the National Democratic Congress (NDC), Mr John Mahama has cast his ballot for the 2020 Presidential and Parliamentary elections at the Bole District Assembly Office.

It took Mr Mahama under five minutes from washing his hands to casting his ballots.

In an interview after voting, Mr Mahama expressed worry that two persons including one of his security officers who had registered at the polling station could not find their names on the voter register despite being in possession of their voter identification cards.

He also stated that it was too early to make an assessment of the electoral process so far.

"It's too early to make an assessment but there are a few hitches... There is a lady here (polling station), she's got her card from this station but her name is not on the list," Mr Mahama said.

"One of my security personnel, I registered here with him and during the exhibition, we checked his name was there but we got here today his name is not there and so I don't know if it's a generalised problem but like I said it's too early to make an assessment.

"We are waiting to find out what the presiding officer would say and we hope that they can rectify it but these are some of the little things that we kept complaining about. I mean the Electoral Commission said they had eliminated 30,000 names from the register without saying whose names they were and I said that on the day people are going to come without knowing that their names have been taken off...".

Mahama’s campaign has focused on job creation and attacking his opponent's record on corruption in the run-up to the elections.

He defeated the incumbent New Patriot Party (NPP) candidate Nana Addo Danquah Akufo-Addo in 2012 but lost to him in 2016.