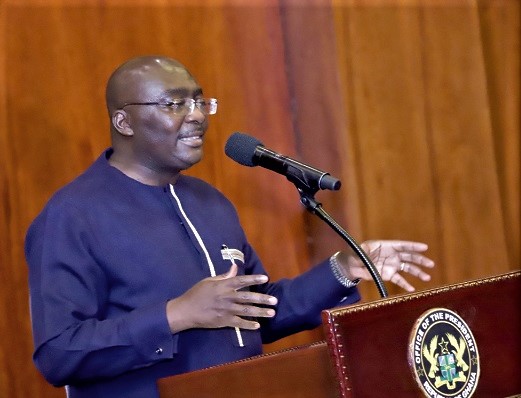 The Vice-President, Dr Mahamudu Bawumia, has said he has not abandoned matters on the economy, as some people seek to suggest.

He explained that what he was doing with regard to digitisation and digitalisation had a direct bearing on the economy.

Addressing participants in this year’s agricultural students career guidance and mentorship dialogue bootcamp (AG-STUD Africa Bootcamp 2022) at the Jubilee House in Accra last Monday on the theme: “Digitalisation — The enabler, the game changer and the future for the agri-youth”, the Vice-President said: “Sometimes people say ‘well, we thought you were an economist, but you’re doing so much in the IT space.

Have you left economics behind?”

“No, no, not at all. In fact, it is because of the economy that I am focusing on digitisation because without building those pillars, our economy will just not be able to stand on its own feet.

“Coming into government and heading the Economic Management Team, the President gave me that mandate and opportunity to focus on how best we can transform and modernise the country to make sure that some of the challenges and risks people are facing in our economy — how we mitigate those risks, how we can make this economy efficient — this is why I have focused on digitalisation,” he explained.

Dr Bawumia further said there was the need to build those pillars to allow all sectors of the economy to compete, “and so we decided to address some of the major bottlenecks that businesses face in the agricultural sector through digitalisation”.

The AG-STUD Africa Bootcamp 2022, which is spearheaded by the Agrihouse Foundation, an NGO, is the fifth edition since its introduction.

The five-day camp project is being participated by about 70 students selected from 14 institutions, including senior high schools (SHS), tertiary institutions and specialised agricultural training institutions across the country.

It is aimed at building the capacity of agricultural students and beginner agribusinesses and start-ups and also expose the participants to the dynamics of the food production market through education, competence-based sessions and leadership programmes.

Dr Bawumia charged the youth, particularly agricultural students, to take advantage of the digitalisation drive of the government to change the phase of agribusiness in the country.

“If you do not understand that, then your economy will lag behind because you will need data to decide when is the best time to plant, harvest or put in fertiliser,” Dr Bawumia said.

He gave an assurance that the government was addressing the bottlenecks confronting businesses, including agriculture, through digitalisation.

The Managing Director of the Agricultural Development Bank (ADB), Dr John Kofi Mensah, expressed delight that the youth were now venturing into agriculture and said no country could develop without the support of the agricultural sector.

He expressed the readiness of the bank to support the project, adding: “This year, the bank will come out with mentors in agribusiness who will undergo training at the Ekumfi Juice Factory.”

He said the ADB would give the participants some stipend and on completion of their programmes support them to set up businesses.

The Country Manager of OCP Africa, a fertiliser manufacturing company, Samuel Oduro-Asare, advised the students not to be afraid to “start small, raw and rudimentary”.

For his part, the Founder and Executive Director of the Agrihouse Foundation, Alberta Akyaa Akosa Sarpong, said the foundation believed in the ability of the youth to change the agricultural systems and the food security equation of the country.