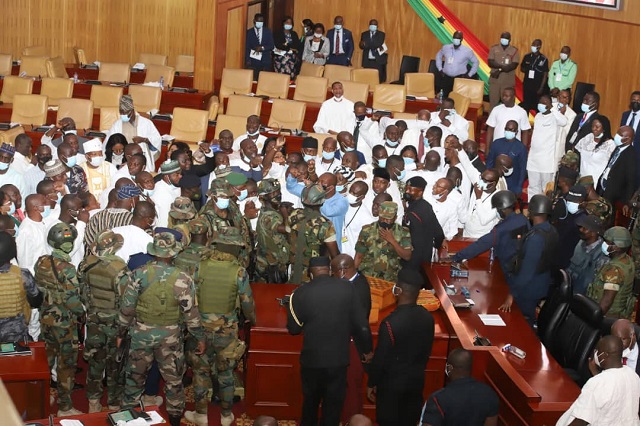 Armed soldiers Thursday stormed the Chamber of Parliament following the continued failure of the Members of Parliament-elect to elect the Speaker for the Eighth Parliament.

The soldiers, numbering about 20, emerged in the Chamber together with armed policemen ostensibly to restore calm in the Chamber.

The well-armed security detail, with some having facemasks, came to the floor of Parliament at about 3.30 a.m. reportedly on the orders of the former Minister of Defence, Mr Dominic Nitiwul.

The appearance of the military rocked the nerves of the legislators especially members of the National Democratic Congress (NDC).

Singing the national anthem and other patriotic songs, the NDC MPs-elect resisted the presence of the military men in the Chamber, asking them to leave.

Standing on their ground, the NDC MPs were heard saying that until the military left the Chamber no vote for the next Speaker should take place. 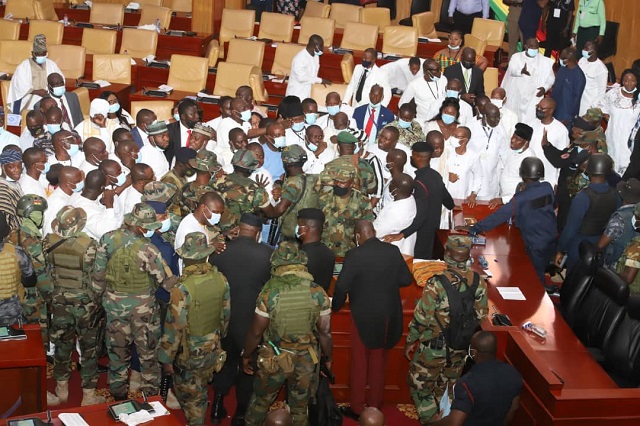 What brought in the military?

Following the dissolution of the 7th Parliament at 12 midnight, the Clerk to Parliament, Mr Cyril Nsiah, told the House of his role to supervise the conduct of the election of the next Speaker of Parliament.

He had also informed the House of a letter he received from the High Court in Cape Coast at about over 4 p.m. on Wednesday informing Parliament of an injunction against the Member of Parliament-elect Assin North, Mr James Quayeson.

He therefore told the House that he was unable to recognize the MP-elect as a Member of Parliament since there was a court injunction against him.

Following the pronouncement by the Clerk to Parliament, lengthy arguments ensued in the Chamber.

After the back-and-forth arguments, the Clerk to Parliament told the House that he would allow the MP to cast his vote but he would bear the consequences of his action.

Soon after that statement, he called for the elections for the Speaker to be conducted in line with provisions of the Standing Order.

However, the ballot which was supposed to be secret turned confrontational as those who were earlier called to cast their votes appeared flouting the rules of voting as they showed their ballots to their colleagues.

Those who were called, mostly NPP MPs-elect were often accused by the leadership of the NDC, led by the MP-elect for Asawase, Mohammed-Mubarak Muntaka, and other members of the misconduct.

Consequently, the NDC leadership insisted the voting booths be rearranged to ensure secrecy of the votes. The ensuing confrontation, which kept recurring, saw some members of the House, led by the Chief Whips of both the NDC and the NPP, engaging each other verbally and physically.

With the House thrown into persistent disorderliness, the armed military men were brought in to help restore calm, to the dismay of the NDC MPs-elect who said the military had no role in what was playing out.

Soon after the military had vacated the chamber, calm was restored as MPs-elect resumed their seats. Later, the Marshal of Parliament told the House that it was his duty to protect the Members of Parliament.

He invited the leadership of both the NDC and the New patriotic Party to a closed-door meeting to deliberate on ways to ensure the smooth conduct of the Speaker elections.

About 30 minutes later, the leadership came back to the House to advise their members to endeavour to abide by the rules governing the voting processing.