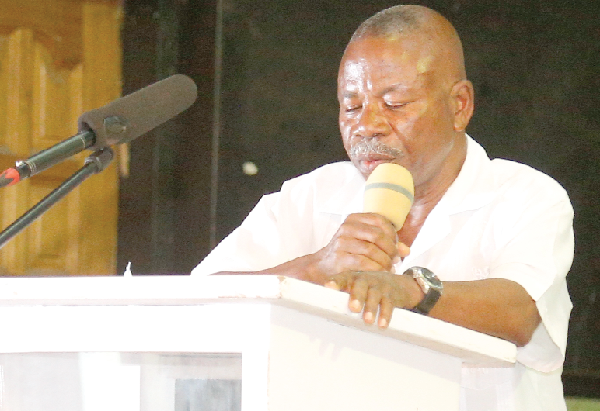 A leading member of the National Democratic Congress (NDC), Mr Eric Bortey, has appealed to members of the party to help build a stronger NDC to win power in the 2024 general election.

He said while the 2024 election was an easy win for the NDC, members of the party needed to stay united and work towards capturing power to rescue Ghanaians from their economic woes.

Speaking at a symposium ahead of the commemoration of this year’s 31st December Revolution in Accra on December 29, Mr Bortey stated that the only obstacle to the NDC’s victory in 2024 was disunity.

“The easiest election for the NDC is the 2024 election but it is the trickiest and what NDC needs to do to win is to unite.

“It is the easiest because the government has not performed well, leaving many Ghanaians in hardships and so we need to rescue the country from its economic woes.

Among those who attended the symposium were the National Chairman of the NDC, Mr Samuel Ofosu Ampofo, a former Minister of Education, Prof. Naana Jane Opoku-Agyemang, the Member of Parliament for Klottey Korle, Dr Zenator Agyeman-Rawlings, and a former Minister of Fisheries and Aquaculture Development, Ms Sherry Ayittey.

The 31st December 1981 revolution ushered in a period of economic and political transformation that culminated in the re-establishment of constitutional rule in 1992.

It was on the theme, “40 Years of Democratic Stability: The Legacy of the Legend”.

Mr Bortey observed that the anniversary was commemorated to protect a legacy that instilled transparency, accountability and probity into the country’s political landscape.

“We are celebrating the 31st December Revolution because we have a legacy to protect the legacy of transparency, accountability and probity.

“We need to tell our story to help inform the young generation so that they can appreciate the journey so far,” he added.

The NDC Member of Parliament (MP) for Krowor, Madam Agnes Naa Momo Lartey, noted that the principles of probity, accountability and social justice had characterised the NDC’s discourse and practice as social democrats.

“Recognising the roles and contributions of women in political party mobilisation, demonstrations, campaigns, fundraising and volunteerism on all fronts have gone a long way to bless the party with the presence of loyal women who are passionate about the present and the future of the NDC,” she said.