Fertiliser usage increases under Planting for Food and Jobs 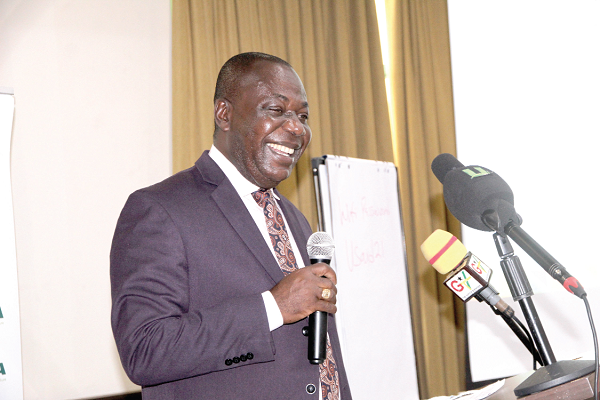 This means the country is getting closer to meeting the international standard of fertiliser usage of 50kg per hectare.

Agricultural experts believe the implementation of a fertiliser expansion programme will enable Ghana to achieve that objective and thereby boost food security.

Addressing a validation workshop on a five-year strategic plan (2020-2024) for the Ghana fertiliser expansion programme in Accra yesterday, the Minister-designate for Food and Agriculture, Dr Owusu Afriyie Akoto, said: "It is interesting to note that fertiliser consumption is more than four times the quantity supplied at the beginning of the PFJ initiative."

Dr Akoto’s speech was read on his behalf by the Director of Crop Services at MoFA, Mr Seth Osei Akoto.

The workshop is the third, after similar ones in Tamale and Kumasi, to get the input of stakeholders to finalise the strategic plan on fertiliser usage for improved productivity, food and nutrition security and job creation.

It was organised by the Ministry of Food and Agriculture (MoFA), with sponsorship from the Alliance for Green Revolution in Africa (AGRA) and the United States Agency for International Development (USAID).

Since the roll out of the PFJ, Dr Akoto said, there had been significant yield increases recorded for selected crops, adding that maize yields, for instance, had increased by 67 per cent from 1.8 tonnes per hectare to three tonnes per hectare.

“Certified seed usage increased from 4,400 tonnes in 2017 to 6,800 tonnes in 2018 and 18,333 tonnes in 2019. Two of the key pillars under the Food Crop Module of the PFJ is the promotion in the use of improved seeds (notably hybrid seeds) and improvement in fertiliser application,” he added.

On the fertiliser expansion programme, Dr Akoto said its objective was to develop the fertiliser industrial sector, including the establishment of the first fertiliser manufacturing plant in the Western Region.

It was also to optimise the entire fertiliser value chain through improved agronomic services, training, farmer education and development of soil fertility maps and formulae to customise fertiliser application, he said.

According to the minister-designate, with the existence of natural gas in the country, it was important to ensure maximum investment in local fertiliser production to reduce Ghana’s dependence on fertiliser importation.

The Technical Adviser on Agriculture at the Office of the President, Nana Serwaa Amoako, said the investment in initiatives by the government to improve the agricultural sector was to create better conditions for smallholder farmers.

The Head of AGRA West Africa, Mr Foster Boateng, said the agenda of the development partners was for effective collaboration between the government and smallholder farmers.

According to him, building the capacity of the smallholder farmer would drive and increase productivity.