Essien's side beat a Ballack inspired team in a Charity Game 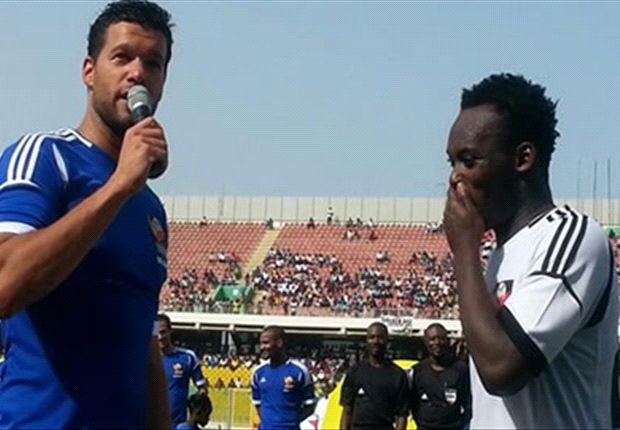 A galaxy of international football stars gathered in Ghana in a charity game aimed at completing a water project in Awutu, the hometown of Essien in the Central region of Ghana.
An assembled Africa XI defeated a World XI 4-2 in a Michael Essien Charity Game on Saturday at the Accra Sports Stadium in Ghana.

The game which was put together by the Michael Essien Foundation and dubbed the Game of Inspiration and Hope brought together stars including Ricardo Carvalho, Djibril Cisse, Michael Ballack, Florent Malouda, Emmanuel Eboue and Emmanuel Adebayor among others in an entertaining atmosphere.

The match started on a slow pace with each side making incursions at both ends, but it was the African side who were more purposeful with players such as Austin Okocha showing that they still have some steam left in them.

Essien scored a penalty early in the first half as Chelsea Under-20 goalkeeper Jamal Blackman fouled Togo striker Adebayor in the 18-yard box. The ‘Bison’ stepped up and sent Blackman the wrong way for the first goal.

Several changes were made with Hamza Mohammed coming on for ex-Bayern Munich guardsman Samuel Osei Kuffour, Olympique Marseille midfielder Andre Dede Ayew replacing his uncle Kwame Ayew and young Ayew quickly made an impact as he delivered a well calculated pass to former Dutch international George Boateng who lobbed the ball over Blackman to make it 2-1.

Retired Nigerian skipper Okocha was a delight to watch with some nice showboating footworks which drew spontaneous applauds from the fans and in one of such he did a one-two with Adebayor before the Togolese international rounded Blackman and placed the ball on the line for Okocha to poke in.

Various changes were made by both sides in the second half which saw players like Rahim Ayew, Jordan Ayew, Mark Bright, Danish international Jeff Mensah, Tony Yeboah and others all getting their chance to play and it was Africa XI, who benefited most as Haminu Dramani brought more urgency into the game with his surging run.

The Arles Avignon player fired a right footer at the edge of the box which goalkeeper Blackman had no answer to make it 4-1.

Goalkeeper Abukari Damba, who came in for Kingson, pulled a fine save from a Cisse volley before minutes later he was rounded up by Scott Smith after a long through ball from Ricardo Carvalho to make the scores 4-2.

Proceeds from the game will go into a charity project at Awutu, Essien’s hometown in the Central region of Ghana.