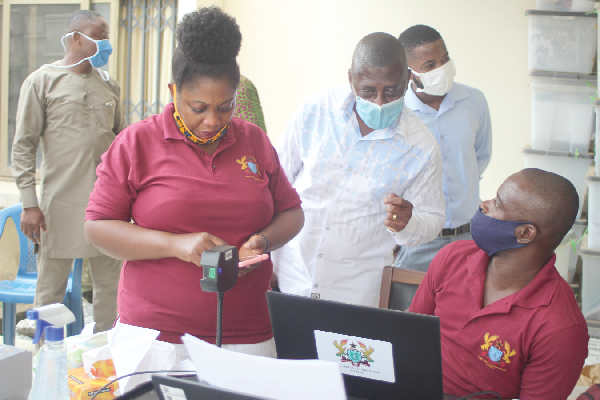 Mr Samuel Tettey (2nd right), Deputy Chairman of the Electoral Commission in charge of Operations, observing the pilot registration process at Amasaman. Those with him include Ms Victoria Boateng (left) and Mr Joseph Obeng Ntim (right), both staff of the EC. Picture: GABRIEL AHIABOR Follow @Graphicgh

The two-day pilot voter registration exercise, which took off at regional offices of the Electoral Commission (EC) across the country Tuesday morning, amid strict adherence to safety protocols, ends Wednesday.

The exercise is to test run the BVR kits, assess the protocols put in place, among other things, in readiness for the main voter registration exercise to take place later this month.

When Daily Graphic teams went round the various regional offices between 9 a.m. and 11 a.m. yesterday, they observed that EC officials were already at post and the centres set up.

Veronica buckets filled up with water for handwashing had been mounted at various points, and before people went to take their seats, they had to have their nose masks on and were made to wash their hands.

Canopies had been mounted, with chairs placed a metre apart from one another for those who were coming to register, while demarcations had been made on the ground to draw the lines for observing physical distancing.

The officials had also set up the logistics required for the exercise, and by 9:50 a.m. the exercise began.

The first port of call was the registration officer’s table, where personal details of registrants were taken.

Hand sanitisers were available for registrants to sanitise their hands, after which their temperatures were taken, before being allowed to start filling the Form 1A that captures one's personal details.

Representatives of some political parties were at the various centres to observe the processes.

From the Greater Accra Region, Desmond Tawiah reports that some residents of Sapeiman in the Ga West municipality turned up to go through the exercise, which was also observed by the Deputy Chairman of the EC in charge of Operations, Mr Samuel Tettey, in the company of the Director of Electoral Services at the EC, Dr Serebour Quaicoe.

Mr Tettey, in an interview with the Daily Graphic, expressed satisfaction with proceedings.

He reiterated the EC’s commitment to adhere strictly to COVID-19 safety protocols to protect registration officials and registrants from contracting the virus during the upcoming registration exercise.

According to him, the pilot exercise offered the EC an opportunity to test measures being put in place to safeguard the health of its officials and registrants during the exercise.

“What we are looking at is the physical distancing issue. We want to look at how people will comport themselves, wear nose masks and adhere to safety protocols during the mass registration exercise.

“At the end of it, we will have a report from EC officials on the challenges they encountered, so that we deal with them ahead of the mass registration exercise.

“The essence of the piloting exercise is to find out how a typical registration exercise will work, test our equipment, the exporting of data, physical distancing, etc. So far, everything is going on well,” he noted.

From Bolgatanga, Vincent Amenuveve reports that the pilot registration exercise began at the Office of the EC in the Upper East Region, with a few residents eager to go through the processes.

The Regional Director of the EC, Mr William Obeng Adarkwa, said the exercise would also be used to collate views from the public after they had gone through the exercise.

He further pointed out that invitation had been extended to all stakeholders, including political parties in the region, to make inputs regarding the pilot exercise to enable the EC to address some of the lapses ahead of the real nationwide voter registration exercise to be held later.

Some residents who went through the process and who spoke with the Daily Graphic said they were unhappy that they did not have their concerns addressed.
Rather, they were told to put those questions, suggestions and opinions into writing for the regional EC for onward submission to the EC Headquarters in Accra.

Samuel Duodu reports from Tamale that people showed interest in the pilot exercise, as they turned up to go through the exercise.

As of about 11 a.m. when the Daily Graphic team was leaving the simulation centre, about 20 people had been registered.

Some of the people who had gone through the process and been issued with ID cards described the process as smooth and fast and hoped that it would be the same when the actual registration began.

Ms Rita Sakina Salifu, who used her passport for the exercise, described the process as smooth and fast, saying: “I spent about 15 minutes to go through the exercise and I hope it will be the same when the actual exercise begins.”

The Northern Regional Director of the EC, Mr Lucas Yiryel, said the regional directorate extended invitation to all political parties and other stakeholders to take part in the pilot exercise.

He said there were 1,944 polling stations in the region that would be clustered into 394 for the actual registration exercise, adding that after the exercise, the EC would do a mop up for all those who are qualified to register but could not do so during the exercise to be captured.

No issue over eligibility

From the Ashanti Region, Daniel Kenu reports that there was little or no contestation over the eligibility of the 20 people who went through the simulation exercise when the Daily Graphic visited the Ashanti Regional EC office.

There was heavy police presence, and the political party representatives who monitored the exercise cooperated with officials of the EC.

The Ashanti Regional Director of the EC, Benjamin Bannor Bio, commended all stakeholders for the level of cooperation.

He hinted that the number of officials would be increased during the main exercise to make for speed and efficiency.

As of about 11 a.m. when the Daily Graphic visited the Bono Regional Office of the EC, there were armed policemen and representatives of the PNC, the NDC, the CPP and the NDP to monitor the exercise, reports Emmanuel Adu-Gyamerah.

Twelve people had been registered and issued with their voter registration cards which could not, however, be used for the December 2020 general election.

A representative of the PNC, Ms Matilda Adongo, who had gone through the registration, expressed her satisfaction with the manner in which it was conducted.

Asked whether she would take part in the main voter registration exercise, she said: "I will do so only if the registration centres are not crowded. For today's exercise, there are only a few people here and the necessary safety protocols are being adhered to."

According to officials of the EC, all logistics had been provided to make the two-day exercise successful.

Mary Anane-Amponsah reports from Ho that the exercise took off an hour late and it still recorded a low turnout.

Meanwhile, the EC office was crowded with party representatives who had gone there to observe the process.

The Volta Regional Secretary of the NDC, Mr James Gunu, who observed the exercise, expressed concern over the current weather conditions as Ghana entered the rainy season.

The Volta Regional Organiser of the NPP, Mr Emmanuel Korsi Bodja, on the issue of low turnout, said it was early days yet to determine that, adding: “We have today and tomorrow for the exercise and so let’s see how it goes…we will also encourage people to come out for them to go through the system. Let’s put pressure on the system to see if it will be able to stand the test of time.”

From Koforidua, George Folley reports that there was not much incidence at the Eastern Regional EC office, as the process went on smoothly.

However, some sympathisers of some political parties who were present to go through the exercise expressed their displeasure at the low publicity given to the exercise nationwide.

They were, however, of the belief that it would gather momentum on the second day of the two-day exercise.