Akufo-Addo's anti-corruption credibility is in the 'coffin' - Gyimah-Boadi 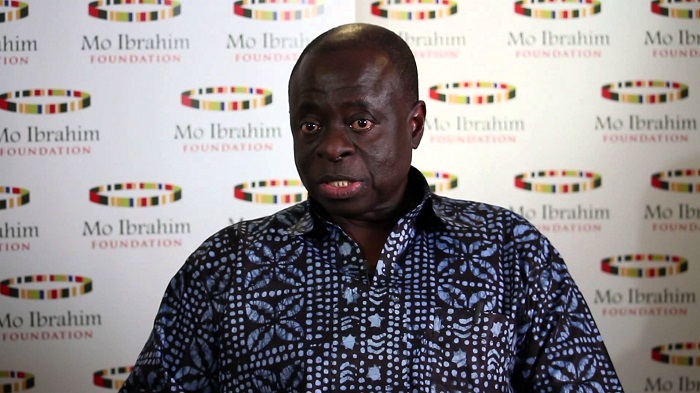 Making reference to what others have described as a forced retirement for Mr Domelevo, Prof Gyimah-Boadi said it symbolizes a situation where it was increasingly becoming clear that the presidency was not ready to work with institutions or leadership it has not appointed.

"I think the worse of it is that, we have a presidency that is increasingly looking like it has difficulty working with institutions and leadership that it has not appointed. Then, the Domelevo incident, or debacle is for me a clear example of that," Prof Gyimah-Boadi said in a television interview which aired on Citi TV, Wednesday night [March 10, 2021].

"As for the President's [Akufo-Addo] credibility in terms of anti-corruption, I'm afraid to say it is in tatters. It has been in tatters for a while but this puts a nail in the coffin," Prof Gyimah-Boadi who is also founder and former Executive Director of the Ghana Center for Democratic Development (CDD-Ghana), added.

An excerpt of the full television interview with Bernard Avle on his Point of View programme earlier played on radio on Accra based Citi FM, was monitored by Graphic Online.

The full tv interview was later aired at 9pm Wednesday.

The immediate past Auditor-General, Mr Daniel Yaw Domelevo proceeded on a compulsory leave on July 1, 2020 following an accumulation of 167 leave days.

He was directed by the Presidency to proceed on that leave following a misunderstanding between him and the Audit Service Board.

The tussle between Domelevo and the Audit Service Board reached a crescendo on Tuesday, March 2, 2021 after it became public that the board had written to inform the appointing authority, the President, that Mr Domelevo had reached retirement age.

It followed what the board said it had found that Mr Domelevo had changed his date of birth on the records of the Social Security and National Insurance Trust (SSNIT) from June 1, 1960 to June 1, 1961 which was not consistent with the personal records of Mr Domelevo in the Public Services of Ghana.

The Board listed the anomalies as Records at SSNIT completed and signed by Domelevo which indicated his date of birth as 1st June 1960 when he joined the scheme on 1st October 1978 with the records showing that he stated his tribe as Togolese and a non-Ghanaian and that his home town was Agbatofe in Togo.

The board added: “On 25th October 1993, you completed and signed a SSNIT Change of Beneficiary Nomination form, stating your nationality as a Ghanaian and your home town as Ada in the Greater Accra Region. The date of birth on your Ghanaian passport number A45800, issued on 28th February 1996 is 1st June 1961. That place of birth is stated as Kumasi, Ashanti Region,” the letter stated.

But in a response to the Board, Mr Domelevo explained that his grandfather was a native of Ada in the Greater Accra Region but migrated to Togo and stayed at Agbatofe.

He indicated that his father Augustine Domelevo migrated from Togo to the then Gold Coast.

“Either my father wrongly mentioned Agbatofe in Togo as his home town to me, or I misconstrued it at the time… My mother is also a Ghanaian,” he explained.

On his date of birth, Mr. Domelevo said he noticed that the 1960 date of birth was a mistake “when I checked my information in the baptismal register of the Catholic Church in Adeemmra [Kwahu area in the Eastern Region].”

“The register has Yaw as part of my name and also provides my date of birth as 1st June 1961 – this corresponds with Thursday or Yaw- the day of the week on which I was born.”

But the Audit Service Board in a letter dated March 2, 2021, said Mr. Domelevo’s explanation of his nationality and narration of his grandfather’s migration was irrelevant.

The letter further described Mr. Domelevo’s answer to the issue of his date of birth as inconsistent.

On Domelevo’s reference to his baptismal certificate to confirm his date of birth, the Board said that the document “is not a valid document to authenticate your date of birth.”

Again, the Board said Mr. Domelevo’s reference to a Parish Priest and provision of his contact for further verification of his date of birth is not admissible.

The Board consequently insisted that Mr. Domelevo was due for compulsory retirement on June 1, 2020.

The Office of the President subsequently in a letter said records and documents available indicated that Domelevo should have retired from office on June 1, 2020.

Consequently, President Nana Addo Dankwa Akufo-Addo thanked him for his service and directed that his deputy, Mr Johnson Akuamoah-Asiedu should continue to act as Auditor-General until a substantive Auditor-General was appointed.

There has been some public reactions to the development since then with some suggesting that Mr Domelevo was hounded out of office because he was fighting corruption.

The Coalition of Civil Society Organisations (CSOs) Against Corruption has urged Mr Domelevo to take action against the Audit Service Board and the Presidency over what they described as “administrative injustice.”

Describing the events leading to his retirement as disappointing, the CSOs argued that the Audit Service Board had no authority under Ghana’s laws to determine the accuracy of Mr Domelevo’s date of birth.

Speaking to the host of the TV programme, Prof Gyimah-Boadi suggested the situation was symptomatic of a bigger problem of an intolerance by the executive [Presidency] to deal with people it had not appointed into office.

"...there are some similarities between Martin Amidu's case and Domelevo's case, but I think the substantive differences are significant.

I see Martin Amidu at least in part [as] a victim of self injury, a scorer of own goal.

But I see Domelevo as a victim of well orchestrated actions by individuals who are officials, and by institutions, state institutions over who Mr Domelevo was exercising proper constitutional and legal oversight, and officials and institutions that Mr Domelevo had sought to hold to account.

The man, who was doing his best to basically protect the public purse, to claim surcharges for an improperly spent public fund, one who is trying to fight corruption is the one who is rather being persecuted, and hounded out of office.

And when you contrast that with the great lengths that have been taken to allow appointees of the President, and supporters of the president and party activists, and others to get the opportunity to claim the benefits and rule of law, to claim the benefits of due process, for internal investigations to be set up and declare them exonerated and so on, when you contrast that with the treatment being meted to Mr Domelevo, its just shameful," Prof Gyimah-Boadi stated.

Asked about how that relates to that of the resigned Special Prosecutor, Mr Martin Amidu, who decided to resign in 2020, Prof Gyimah Boadi said the situation was disappointing, "but disappointing for reasons I believe Mr Amidu has to take some responsibility for..., to the extent that to my knowledge, he [Amidu] was given adequate resources to work with, and if he wasn't given adequate resources to work with, there were others in the wings to help and to support and also he didn't really stay that long on the job and tried to fight it out."

"As for the President's [Akufo-Addo] credibility in terms of anti-corruption, I'm afraid to say it is in tatters. It has been in tatters for a while but this puts a nail in the coffin," he said.