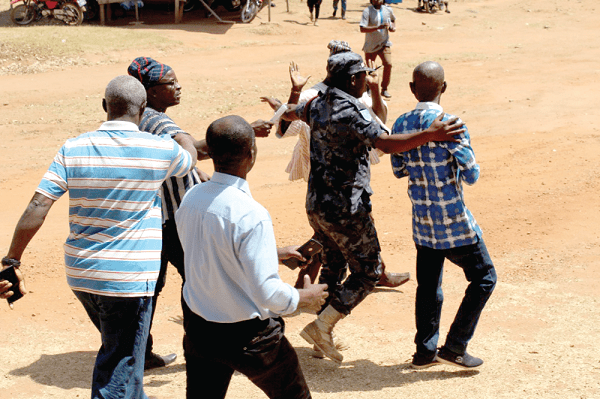 The Kintampo North Municipal Assembly in the Bono East Region last Monday elected its Presiding Member in an election characterised by invocation of curses and heckling of the Municipal Officer of the Electoral Commission (EC), Mr Kassim Kaka.

What started as a smooth process with the withdrawal of the candidature of one of the contestants to pave the way for the assembly to get a presiding member, 10 days after the first election, ended in a stalemate and degenerated into a chaotic situation.

But for the timely intervention of the police who managed to whisk the EC official away, he would have been assaulted by a section of the assembly members who accused him of manipulating the results and heckled him, both inside and outside the assembly hall.

When the assembly was inaugurated two weeks ago, it could not elect its presiding member because each of the two candidates, Mr Paul Adu Frimpong and Mr Mohammed Abdul Aziz Sumaila obtained 29 votes each which fell short of the required two-thirds majority of 44 votes.

Mr Sumaila’s gesture, which paved the way for the voting to either endorse or reject the candidature of Mr Frimpong, received a lot of commendation from the assembly members.

In the ensuing poll, 50 assembly members voted “Yes” while 13 others voted “No” for the endorsement of Mr Frimpong.

However, soon after the declaration of results, Mr Sumaila and some of his supporters accused the EC official for denying the “No” voters, the opportunity to have their agent at the table where the ballots were counted.

The back and forth of the issue inside the hall later continued outside with Mr Sumaila and his group chasing and heckling Mr Kaka until he was whisked away in a white Nissan Pick-up.

Not satisfied with the turn of events, one of the assembly members, Mr Charles Gyinde, who the Daily Graphic learnt is also the Kintampo North Constituency Communication s Director of the National Democratic Congress, fetched a bottle of Schnapps and invoked curses on “all those involved in the manipulation of the election”.

He later collected an egg from a member of the dissatisfied group and broke it on the ground to further validate his invocation of curses.

While going on with his actions, some of the bystanders pleaded with him to stop by reminding him that he was a Christian and a member of the Assemblies of God Church but that did not deter him.

After the invocation of curses, the dissatisfied group stayed out of the hall and returned for the rest of the business of the house after Mr Frimpong was sworn into office.

The various committees of the assembly were formed with Mr Sumaila as the Chairman of the Ad-hoc Agricultural Sub-Committee of the assembly and an automatic member of the executive committee.

In his maiden address, Mr Frimpong thanked the assembly members for the confidence reposed in him and pledged to respect the opinions of all.