You cannot persecute journalists for misreporting - Speaker to police 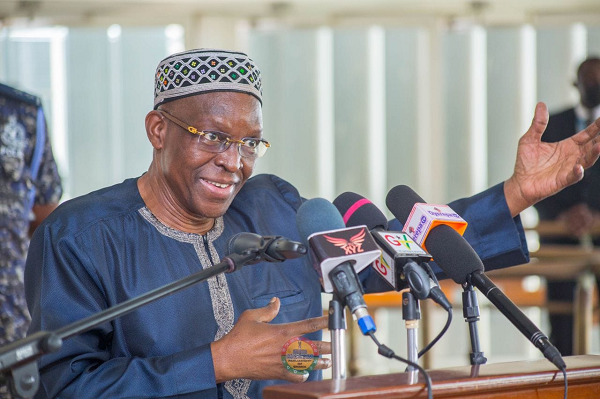 The Speaker of Parliament, Mr Alban Sumana Bagbin, has condemned the increasing arrest and incarceration of journalists by the police over misreporting against some individuals, especially politicians in the country.

He said the police could not assume responsibility for responsible media practice in Ghana by scanning newspapers and news portals and arresting journalists for errors and misrepresentations.

"I do not know how our police CIDs were trained; that if there is an allegation of misreporting made which I consider as a misdemeanor, the first thing is to arrest or hijack that citizen by the trousers,” he stated.

Speaking at the inauguration of a Press Centre for the Parliamentary Press Corp (PPC) in Parliament yesterday, the Speaker said, "The increasing tendency on the part of the police to arrest journalists for what they describe as mistakes is old school, anachronistic and is sending this country back into the dark ages of media persecution.

"As we all know, freedom is not worth having if it does not connote freedom to err," he stressed.

The new office, equipped with 16 new Lenovo-branded desktop computers, is to provide conducive working environment and facilitate the work of members of the corp.

To err is human

Mr Bagbin noted that often times, in our quest as journalists to disseminate the information they had in a timely manner to beat the deadlines set for them, journalists made some mistakes.

"Our information at times does not turn out to be entirely accurate. We end up making some misrepresentations; at times impugning on the integrity and reputation of others.

"The media space and Ghana’s legal regime for the media anticipated this and has prescribed a way out. That is why we have the National Media Commission; and that is why this country has plethora of laws on the media and free speech," the Speaker stated.

He, therefore, said any attempt by any politician, hiding behind the police institution to act as the standard bearer of ethical and professional journalism or the regulator of journalism practice, was not only a pretender but also megalomaniac.

The Speaker said those who became offended by inaccurate write-ups of journalists knew what recourse they had.

"I am not for a moment holding brief for irresponsible and unprofessional conduct of journalists. I am simply saying there is a cure for that in our current legal regime," he said.

The Speaker emphasised the urgent need for Parliament to revise the laws of the NMC to "add some teeth and resources for the commission to be effective."

He said it was because of those challenges of media misreporting that there were so many laws on free speech.

Mr Bagbin cited how as a lawyer he was compelled to take a number of journalists to court in the early days of his law and parliamentary practice, using the "rule of law, not the rule of man."

Expressing profound appreciation for the work of the members of the PPC, playing a critical role as a link between Parliament and the citizenry, Mr Bagbin said he was persuaded that a good working environment would enhance the members' professionalism and also improve upon their effectiveness.

"While we as Parliament focus on providing you with the space and logistics that will enhance what you do, I expect the Public Affairs Department, which we have planned to rechristen, restructure and strengthen soon, working with the various media houses to ensure that media personnel who are assigned to Parliament have a certain profile of seniority, experience and professionalism,".

Earlier, the Deputy Minority Leader, Dr James Klutse Avedzi, expressed disdain for the creeping culture of silence in the country and the arrest of journalists.

That, he said, dented Ghana's image as a country where freedom of speech was encouraged

The Second Deputy Majority Whip, Mr Habib Iddrisu, also condemned attacks on journalists and expressed the government's commitment to ensure a safe environment for the citizenry.