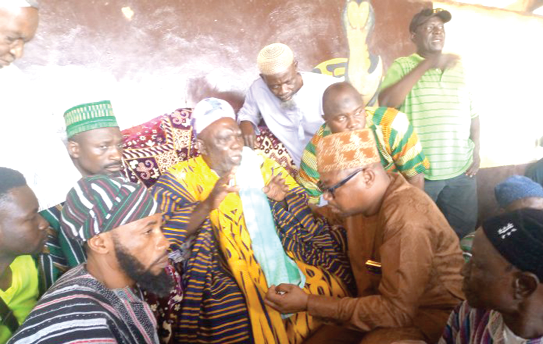 Ghanaians on Sunday were shocked to hear the wanton shooting by police officers at Lamashegu which led to the death of one person and injury to many others.

To this end, the Chief of Lamashegu in Tamale, Naa Ziblim Abdulai has called for an independent investigations into the shooting incident .

He has also called for justice to be served the victims, stressing that the police officers who were involved in the shooting incident should be punished to serve as deterrent to others but not “the usual transfers phenomenon”.

Recounting the incident to the Daily Graphic, he said, “What the police officers did was disrespectful to the highest level. I feel disrespected for them to enter my palace to shoot someone because he was driving an unregistered car. Though the police have since apologised, I want them to face the law”.

He, however, called on the youth of the community to remain calm and allow the security to conduct thorough investigation into the incident.

The incident is said to have occurred when a man driving an unregistered vehicle allegedly ignored a signal by a police patrol team to stop.

The police then chased and fired at him as he drove into the palace of the Lamashegu Chief for refuge.

The youth then pelted the police with stones and burnt lorry tyres on the streets.

The deceased, Abdul Hakim, was apparently hit by a stray bullet and was pronounced dead later at the Tamale Teaching Hospital where he was rushed to.

Following the incident, the police administration has interdicted six officers involved in the shooting incident.

The interdiction follows preliminary investigations into the shooting incident which led to a subsequent attack on the Police by the youth of the Lamashegu community.

A statement issued by the Director-General of the Public Affairs of the Ghana Police Service, Deputy Commissioner of Police (DCOP), Mr Kwesi Ofori, appealed to the people of Lamashegu and the entire Tamale Metropolis to remain calm as investigations continues into the unfortunate occurrence.

Meanwhile, some seven persons who were picked up by the police in connection with the scuffle were released on Monday upon the advice of the Northern Regional Security Council.

The young boy who lost his life has also been buried after a pathologist from Accra conducted an autopsy on him on Tuesday afternoon.

It was a sorrowful moment when the body was conveyed from the morgue to the cemetery for burial as residents described the deceased as a calm and respectful boy who was full of life.

On Tuesday dawn, some irate youth at Lamashegu South electoral area allegedly set ablaze a chamber and hall apartment belonging to a fire service officer after she was mistaken to be a police officer.

The perpetrators were aiming at a police officer, who is also a tenant in the house believed to be involved in last Sunday’s shooting incident.

Meanwhile, one of the officers, General Corporal Samson Kweku Darfour, who allegedly shot into the unregistered Toyota Camry that triggered the clash was remanded into police custody by a Tamale Circuit Court on Wednesday.

He was charged with causing harm and is expected to reappear in court on February 24.

Another officer, Corporal Monney Koranteng, who allegedly made derogatory comments on social media against the Lamashegu Chief and the people, was also charged for offensive conduct conducive to the breach of peace.

He was however granted bail to the tune of GH¢5,000 with two sureties. He is also expected to reappear before the court on February 28.

Members of the Northern Regional Security Council (REGSEC) on Monday morning visited the community to engage the chiefs and people for calm.

The Mayor of Tamale, Mr Sule Salifu who led the security delegation on the visits condemned the violent act and appealed to the youth to exercise patience for the security to conduct its investigation.

He gave the assurance that the incident would be thoroughly investigated to bring the perpetrators to book.

He also commended the Chief of Lamashegu, Naa Ziblim Abdulai, for rescuing the police officers from being lynched and bringing the situation under control.

Though relative calm has since returned to the community, the residents said they cannot come to terms with the incident.

Security has been beefed up to restore peace and order.