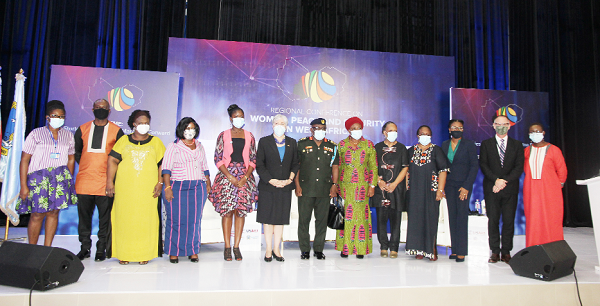 Stakeholders at the West African Regional Women, Peace and Security conference have expressed dissatisfaction at the slow progress in women’s participation in peace-building and security.

They said the development had led to new conflicts and the widening of the gap in gender equality.

The event, organised by the Kofi Annan International Peacekeeping Training Centre (KAIPC), in partnership with the United States Agency for International Development (USAID), through its Partnership for Peace (P4P) Project and the G5 Sahel Secretariat, brought together experts in the field of gender and security from West Africa.

Held on the theme: “Our Stories, Lessons and Marching Forward”, the conference sought to create a platform to exchange and share knowledge of progress made in the implementation of the women, peace and security agenda within West Africa.

It was also to offer stakeholders the opportunity to draw synergies between various actions in their respective organisations with the aim of strengthening the voices of women in the region as agents of change.

The US Ambassador to Ghana, Mrs Stephanie Sullivan, indicated that the dynamic trend of violent extremism in the sub-region called for all people at all levels, including women, to be included in the efforts to prevent or counter violent extremism.

She said that could be achieved when citizens, especially women and the youth engaged one another and advocated the development of families and the security of their communities.

Mrs Sullivan said the US government, through the USAID and the Department of Defence, continued to contribute to efforts towards peace and security by undertaking development-focus programmes and security exchanges which often highlight the importance of peacemakers and their role in conflict resolution.

While commending the KAIPTC for its efforts towards sustainable peace across the region with keen interest in contributing to the advancement of the women, peace and security initiatives across the region, she reiterated the US government’s commitment to continue its collaboration with the G5 Sahel, to find effective and inclusive solutions to promoting peace, security and development in West Africa and the Sahel.

Delivering the keynote address, the Director of the Centre for Democracy and Development, (CDD) of Nigeria, Ms Idayat Hassan, indicated that in spite of efforts aimed at gender mainstreaming and shedding more light on the importance of women in pease-building efforts, there had been little commitment in the implementation of pacts and protocols.

Gender equality indexes, she said, had seen an average of 31.9 per cent within the region, which was way below the continental average of 38.4 per cent, adding “It is no surprise that the region has remained in the storm of one conflict after another.”

She said child marriage and political under-representation with men dominating decision making processes on matters that had an impact on women, ought to be discouraged.

In his remarks, the Executive Secretary of the G5 Sahel, Mr Maman Ssdikou Sambo, said although the secretariat had in recent years made significant progress in gender mainstreaming at both institutional and programmatic levels, it was important to sustain the advocacy for the effective implementation of the women, peace and security agenda.

The Commandant of the KAIPTC, Major General Francis Ofori, in his welcome address,  stressed the importance of discussing the bottlenecks associated with the gender mainstreaming for stakeholders to learn from one another to advance the cause of women, peace and security.