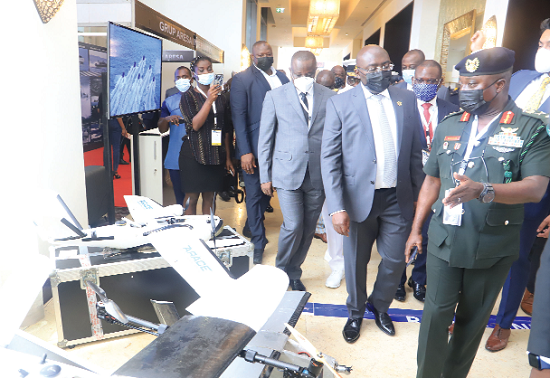 The Vice-President, Dr Mahamudu Bawumia, has tasked agencies responsible for maritime security to collaborate to dismantle the networks that sustain piracy as a business model.

He equally charged the security agencies to penetrate the levels of secrecy surrounding negotiations and payments and also the true identity of the criminal actors.

The Vice-President gave the charge when he opened the second International Maritime Defence Exhibition and Conference (IMDEC) in Accra yesterday.

He said without that resolve, it would be very difficult to secure the maritime domain in the quest to fully develop the blue economy.

The three-day conference, the largest gathering of maritime officials in Africa, is on the theme: “Maritime security and trade — The nexus between a secure maritime domain and a developed blue economy”.

It attracted more than 300 participants, including Admirals, Generals, Chiefs of Naval and Air Forces, Service Chiefs and Ministers of State from over 70 countries in Africa and across the world.

The conference, which is being organised by Great Minds Events and hosted by the Ghana Navy and the Ghana Air Force, also has international partners in maritime and defence, as well as more than 40 exhibitors of military and security equipment and accoutrements and sponsors.

“I am informed that the network which sustains this module of piracy is larger than the traditional case of piracy of cargo stealing. This network now involves negotiators, intermediaries, facilitators and racketeers, as well as individuals acting in official or professional capacities, such as insurance and risk analysts, professional negotiators and security companies,” Dr Bawumia said.

“We have to work together to dismantle the networks that sustain this business model and penetrate the levels of secrecy surrounding negotiations and payments, as well as the true identity of the criminal actors,” he stressed.

He added that those new dimensions bearing on insecurity in the maritime domain were a wake-up call that, “indeed, all of us gathered here have a lot of work to do.”

The Vice-President cited reports indicating that 79 actual and attempted attacks were carried out last year, representing a 34 per cent increase over the 59 attacks recorded in 2019.

He added that reports along the Gulf of Guinea in recent times also signaled a surge in attacks by Pirate Action Groups (PAGs), with most incidents occurring along the coasts of Cameroon, Nigeria, Benin and Ghana.

Similarly, he said, there was a rise in the number of cases of kidnapping for ransom (KFR) and hostage-taking, and mentioned, for instance, that in 22 separate attacks recorded last year, 130 out of the 135 people kidnapped globally were reportedly abducted in the Gulf of Guinea alone.

That, Dr Bawumia indicated, represented 95 per cent of all kidnapping cases, during which Nigeria recorded 62, Benin 29 and Ghana six.

The situation, he said, had become even more precarious, considering that over the past two months, about 10 crew members of two Ghanaian-flagged fishing vessels had been abducted in separate incidents along the Gulf of Guinea.

While expressing the commitment of the government to tackle the insecurity in the maritime sector, Vice-President Bawumia said the first half of the year had witnessed greater piracy threats and activities, with over 30 recorded incidents.

More disturbing was a report from the Centre of Maritime Law and Security Africa (CEMLAWS) that KFR had developed into an ‘improved business module’ which attracted criminal groups to shift from theft and robberies.

Describing the maritime sector as the pillar of the Ghanaian economy, with over 80 per cent of international trade, the Vice-President said protecting the maritime domain of the country was a fundamental agenda for Ghana, all countries in the Gulf of Guinea, the 39 other coastal African states and the rest of the world.

He, therefore, emphasised the resolve of the government of Ghana to modernise and re-equip the Ghana Navy to lead the charge in that regard.

“For a start, the government is acquiring Offshore Patrol Vessels (OPVs), fast patrol boats and crafts. It is also making funds available for the timely completion of the forward operating base at Ezinlibo and there are plans to establish similar bases on our coastal frontiers,” Dr Bawumia said.

Again, the government would see to the training and welfare of Naval personnel to put in their best and remain professional in the discharge of their duties, he added.

The Chief of Naval Staff, Rear Admiral Issah Yakubu, who welcomed the participants, said “our maritime column had been touted as one of the most dangerous waters in the whole world and this has dire consequences on trade.”

He said the region’s blue economy (the economics of exploitation, preservation and regeneration of the marine environment) had suffered significantly from disruptions in international trade, fishing and other challenges due to the insecurity in the maritime domain.

However, Rear Admiral Yakubu said in spite of the threats posed by the COVID-19 pandemic, the Ghana Navy and allied services could not afford to slow down their operations because the criminals had increased the tempo of their operations.

He was hopeful that as experts in the industry, they would cooperate effectively to determine the best way forward to tackle the maritime threats.