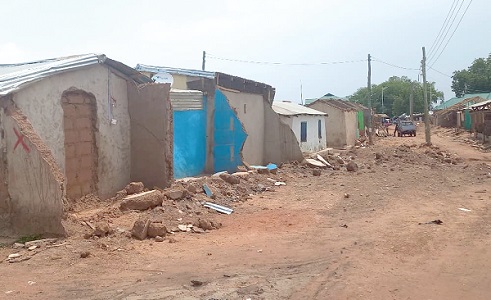 Portions of the buildings destroyed during the exercise Follow @Graphicgh

Scores of residents of Walewale in the West Mamprusi Municipality in the North East Region have been displaced following a demolition exercise by the local assembly to pave the way for the construction of roads.

Last Friday’s exercise resulted in the destruction of a number of houses, mosques and shops along some link roads in Walewale.
Nayiri Fong, Fogni and Zongo were among the affected areas.

The affected residents accused the authorities of unfair treatment, saying they were not served any notice before the demolition exercise.
As of yesterday, a number of displaced residents were perching with relatives and in mosques when the Daily Graphic visited the town.

Some of the victims who spoke to the paper said the assembly should have made arrangements for their relocation instead of leaving them homeless.

They appealed to the authorities for compensation to enable them to rebuild residential accommodation.

A victim, Hamidu Amadu, whose three rooms were destroyed, said they could not salvage their property because they were not served prior notice.

"The assembly didn’t discuss anything with us; if you want to demolish our structures, at least, compensate us or build somewhere for us. Where does the assembly want us to go?” he quizzed.

Another victim, Fatima Mohammed, appealed to the government to, as a matter of urgency, come to their aid to alleviate their plight.

Reacting to the incident, the Chief Executive of the West Mamprusi Municipal Assembly, Issahaku Aremeyaw Somo, refuted claims that the assembly did not serve the victims notice.

According to him, the residents were given ample time to vacate their premises to allow for the construction of the second phase of the town roads.

He indicated that the assembly had no plans to pay compensation to the victims.