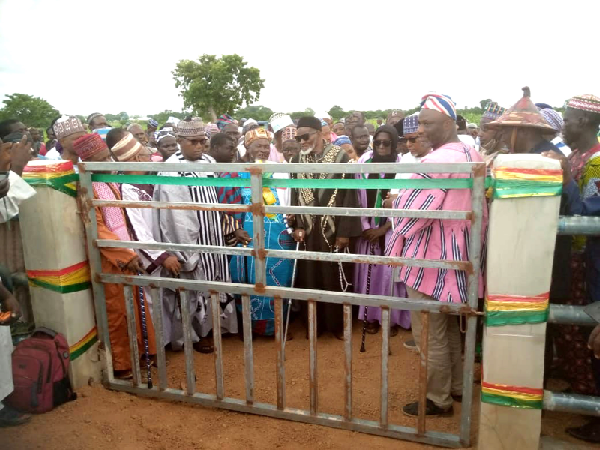 Issahaku Aremeyaw Somo (right), the MCE for Walewale, being assisted by leadership of the Fulani Herdsmen to inaugurate the facility
30.5k Shares

A market to boost trade in cattle and their mobility in the North East Region and across the sub-region has been inaugurated at Walewale.

Known as the Walewale Cattle Market in the West Mamprusi Municipality, the facility is expected to help boost the production of quality cattle and create jobs along the livestock value chain.

The market, which is the first of its kind in the region, consists of WASH facilities, a security post and two offices for both revenue collectors and the leadership of the market.

It was constructed by the West Mamprusi Municipal Assembly at an estimated cost of GH¢275,000.

At the inauguration ceremony in Walewale last Sunday, the Municipal Chief Executive for West Mamprusi, Issahaku Aremeyaw Somo, indicated that the market was solely funded by the assembly through its Common Fund and is expected to double the Internal Generated Fund (IGF) of the assembly.

He said it was in line with the government's Rearing for Food and Jobs (RFJ) programme that sought to develop a competitive and efficient livestock industry to increase production, reduce meat imports and create jobs along the livestock and poultry value chain.

He indicated that plans were underway to expand the market to create enough space for the relocation of all kinds of livestock to the new facility.

For his part, the North East Regional Minister, Yidana Zakaria, admonished the cattle traders to patronise the market to make it vibrant.

"From now onwards if you have cattle to sell, then it must certainly be at the Walewale Cattle Market; that is the surest way we can help grow the market," he said.

The General Secretary of the Fulani Association, Yakubu Baary Musah, commended the assembly for constructing the market, saying it would go a long way to boost cattle trade and improve on the lives of the people, particularly Fulani herdsmen.