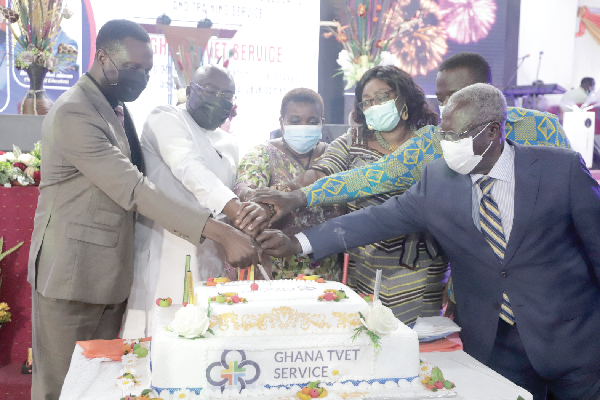 All technical and vocational education and training (TVET) institutions captured under the newly unveiled Ghana TVET Service will be included in next academic year’s Computerised Schools Selection and Placement System (CSSPS) for selection by junior high school (JHS) graduates, the Vice-President, Dr Mahamudu Bawumia, has announced.

He said those who would select TVET institutions would benefit from the government’s free TVET and free senior high school (SHS) policy.

Dr Bawumia announced this when he launched the Ghana TVET Service at the Accra Technical Training Centre (ATTC) yesterday.

The launch was on the theme: “Stirring Ghana’s industrialisation drive through skill acquisition for national development”.

The Vice-President said as part of implementing the TVET agenda, the government was establishing the first-ever second-cycle TVET applied technology high schools across the country.

“The programmes will be benchmarked against international best practices and standards. Most importantly, the applied technology high school will build strategic alliances with community, industry, development partners and the government to ensure that it is responsive to national needs and expectations of socio-economic transformation,” he said.

Dr Bawumia added that already the government had designated all new TVET institutions in the country for the programme.

Throwing more light on the initiative, he said there was also the opportunity for those who would complete the TVET programme to continue from the national proficiency level through certificate and Higher National Diploma (HND) levels to Bachelor of Technology (B.Tech), Master of Technology (M.Tech) and Doctor of

Technology with the national TVET qualifications framework which the commission was implementing.

He described the step taken by the government as a major milestone and expressed the hope that all Ghanaians would appreciate the programme.

Dr Bawumia said the Ghana Beyond Aid agenda could be possible when the youth were equipped with competitive skills, saying that was why the government was paying more attention to skills development

“Today in the world, we have seen a movement away from the world of certificates to a world of skills. Your certificates only matter fundamentally in this new world if they allow you to perform certain skills,” he said.

He said it was well documented that there was a rising global demand for artisans and technicians in various fields in the global economy, adding that in view of that, the government had also embarked on several reforms to reposition TVET education to produce a critical mass of highly skilled youth for the country.

A Senior Advisor to the President, Mr Yaw Osafo-Maafo, said the renewed emphasis on TVET was to correct the years of neglect of the sector in order to reposition skills development as a catalyst for national development.

He added that by creating the Ghana TVET Service, “we have essentially brought together over 280 institutions from 20 ministries, departments and agencies”.

He called for support for entrepreneurship programmes and the E-Levy contained in the 2022 Budget, saying they were fundamental and underscored the relevance of entrepreneurship and the job-creation agenda.

The Director-General of the Ghana TVET Service, Mrs Mawui Nudekor Awity, said the mission of the service was to give a new face to TVET in the country, reignite the passion of young men and women in the sector, as well as make the sector the first port of call for education in the country.

She said a lot more community sensitisation and stakeholder meetings had been held by her outfit to encourage more young people to choose TVET schools, while successful candidates had been given bigger opportunities to also realise their TVET dreams.

In 2017, the government constituted a 15-member technical committee, with membership from various ministries and agencies, to establish the Ghana TVET Service.

After extensive work, including a national stakeholder engagement, the committee presented a draft bill to the Cabinet for approval in 2019, after which it was forwarded to Parliament for passage into law, the Pre-tertiary Act 2020 (Act 1049), and assented to by President Nana Addo Akufo-Addo on December 29, 2020.

Under the act, all TVET-providing institutions which were under 19 ministries were realigned to the Ghana TVET Service.

Prior to the setting up of the committee, the sector was confronted with many challenges that made it difficult for it to become the key catalyst to spur industrialisation and decent job creation for the citizenry.