Vice President Dr. Mahamudu Bawumia has described the late Municipal Chief Executive for Bibiani-Anhwiaso-Bekwai, Alfred Amoah and his driver, Samuel Gyasi as "dedicated patriots who served with dignity and passion."

Alfred Amoah and Samuel Gyasi died on Tuesday when the vehicle on which they were travelling from Accra to Bibiani was involved in an accident at a spot near Apedwa in the Eastern region. They are said to have died on the spot.

Dr. Bawumia took to Facebook Wednesday morning to wish the souls of the pair a perfect rest, describing their deaths as sad.

"Sad to hear the death of Hon. Alfred Amoah, MCE for Bibiani Anwiaso Bekwai Municipal Assembly, and his driver Samuel Gyasi. Both Alfred and Samuel have been dedicated patriots who served with dignity and passion.

"May the souls of our dear brothers rest in perfect peace", he wrote on Facebook, posted along with a photo of the late MCE. 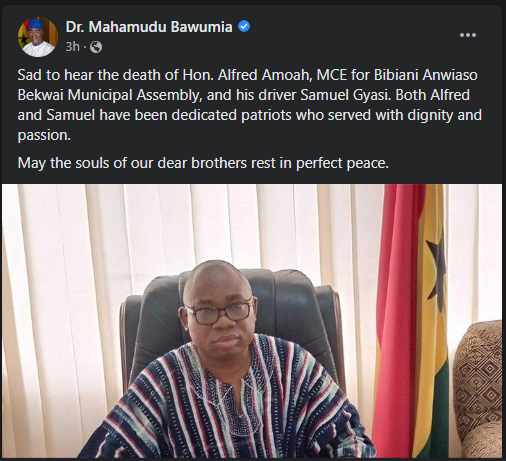