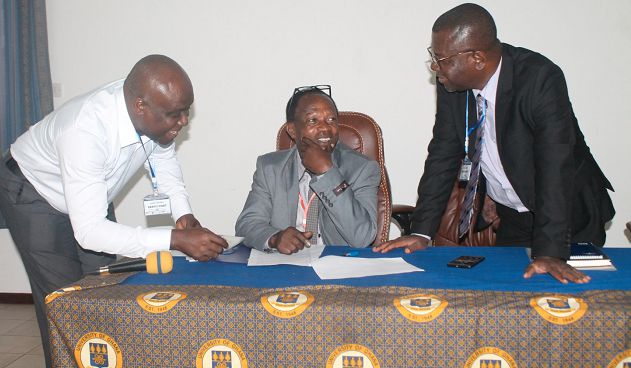 According to the Ghana Coordinator of Organic Resource Management for Soil Fertility (ORM4Soil) project, Professor Godfred Ofosu-Budu, it had been proven through research that cocoa pod, empty fruit bunches, mature cow dung and composted fresh cow dung were resources available locally that could improve soil fertility.

“It has been shown that the use of organic resources on farms over a long period has the potential to enhance soil fertility and quality with positive socio-economic, agronomic and environmental impacts,” he said.

He explained that inorganic fertilisers such as the NPK used mostly in Ghana to improve soil fertility had negative effects on the soil and thus encouraged the use of organic resources instead.

The ORM4soil project is a farmer-driven organic resource management organisation and a part of the Research for Development (r4D) programme which is sponsored by the Swiss National Science Foundation and coordinated by the Research Institute of Organic Agriculture (FiBL) in Switzerland.

Prof. Ofosu-Budu made the assertion at a conference on food security in Accra last Monday when he spoke on the theme: “Transforming food systems in Ghana: the potential of agro-ecology in times of climate change and biodiversity crisis”.

He said the current rate of nutrient depletion and environmental degradation in Ghana required that soil fertility was restored through ideally suited agricultural management techniques.

“Through a rapid assessment with the participatory farmers, we identified locally available organic resources which were used to design and establish on-station and on-farm trials at the Kade and Sege sites,” he said.

He said the sites were selected based on climatic conditions: Kade in the forest and Sege in the Coastal savanna agro-ecologies.

He said so far four cropping seasons had been conducted at the two sites, with maize and sorghum/pepper as test crops for Kade and Sege, respectively.

“These trials were conducted at both on-station and on-farm and involved at least 15 farmers at each site. We can conveniently say that through the combined use of the locally available resources, we were able to reduce the use of inorganic fertilisers by over 40 per cent at Kade,” he said.

He added that he was hopeful that in some years to come the use of organic fertilisers would surpass that of inorganic ones.

He said so far the implementation of the national climate policy was yielding results as families and communities had enough food for themselves and for business.

Touching on the impact of climate change to food security, he said in spite the volumes of rainfall being over and above normal, farmers must capitalise on the rains and grow crops by harvesting rain water and using it to supplement their agricultural activities.