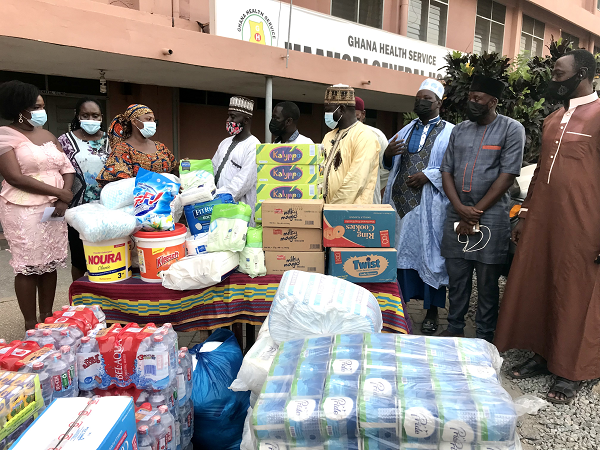 As part of its effort to spread its humanitarian wings, the Ummu-Qura Islamic institute in Accra New Town last Friday donated some assorted items to the maternity ward of Mamobi General Hospital.

The donation is part of the organizations’ ongoing effort to strengthen peaceful coexistence amongst people of diverse backgrounds and to be active participants in the country’s socio-economic growth.

Presenting the items to the hospital, the Director of Ummu- Qura Institute, Dr Abdul Aziz Farran said healthcare is of considerable priority to the community, hence the core objective of the institute revolves around actively supporting a decent healthcare delivery system and was optimistic that such a gesture will support the wellbeing of patients on admission.

Dr Farran indicated that healthcare is a crucial service that requires the collective duty of all and sundry adding that a true believer of Islam will go the extra mile to ensure their neighbour was in good health and spirits.

He explained that the humanitarian activity of the organization is exemplified by the teachings of the prophet of Islam Muhammed ( PBUH) which espouses Muslims to extend a helping hand to their neighbours and friends regardless of their religious differences.

“if we look at the trial that a person goes through in life. sickness is one thing that comes without any warning and what a patient usually needs is sometimes between life and death. So any little help could mean saving a life,” he noted.

Receiving the items on behalf of the hospital, the Administrative Manager, Mrs Jacquelyn Tetteh-Ashong expressed gratitude for the kind gesture extended to the facility. She said it was heartwarming of the institute to go out of their way to give back to society.

She said such donations go a long way to help the hospital effectively run its affairs and appealed to well-meaning Ghanaians to continue to support the hospital and other health facilities across the country.

Commenting on the donation, Dr Abu Dujana Basha, the Imam and Director of Darul Tawhid Institute in Tamale said the organisation has embarked on such initiatives annually and now chose to focus on a health facility, particularly the maternity ward.

He said it’s imperative for people who have some semblance of health to put their feet in the shoes of those on admission at the hospitals. Dr Dujana explained that anyone could go through the trial of ill health and expressing kindness to them is a prayer to the almighty to avert the trials.

He, therefore, used the occasion to encourage Muslims to practice to teachings of the prophet by showing compassion to the less fortunate in their communities and beyond.

“We are also using this donation as a way to teach our members and society, in general, to participate in the act of giving and we must not restrict the teachings to just words. We must continuously verbalize it and emulate the best examples of our prophet both in public and in private,” he added.