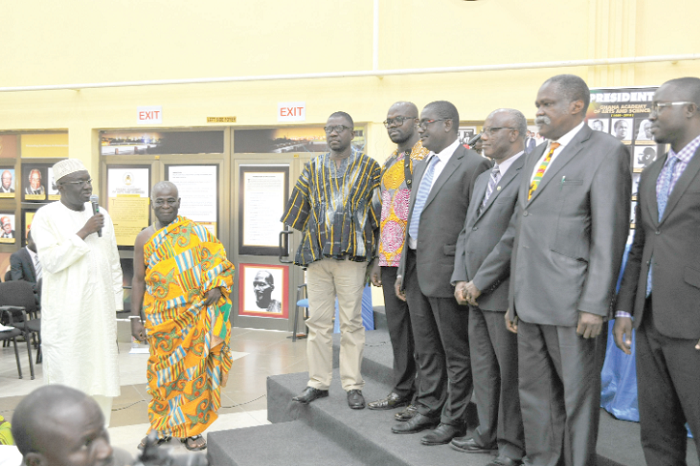 Mr Joseph Kofi Adda, the Minister of Sanitation and Water Resources, swearing in the board of the Tersus Ghana Environmental Sanitation Think Tank at the Ghana Academy of Arts and Science conference room in Accra. Picture: EMMANUEL QUAYE
30.5k Shares

The think tank, called Tersus Ghana, will provide input and guidance for rigorous empirical research that will produce environmental sanitation-related information relevant to the sector and the nation as a whole.

Tersus, a Latin word for ‘clean-up’, will operate as a not-for-profit, non-partisan group with a membership made up of government, academia, as well as non-governmental organisations (NGO) and industry-based experts.

Inaugurating the 10-member board of the group, the Minister for Sanitation and Water Resources, Mr Joseph Kofi Adda, said the think tank had come at a time when the government was striving to ensure not only sustainable clean cities and communities but a general situation that would improve productivity by lowering and eliminating sanitation-related diseases.

He said plans were far advanced to set up a National Sanitation Authority to co-ordinate all environmental sanitation and related programmes nationwide while the existing sanitation policy would be revised and updated to take into consideration  current sanitation trends.

Mr Adda also announced that the ministry was putting in place a national strategy to deal with the sanitation challenge in the country and would also organise a strategic sanitation forum involving all stakeholders to brainstorm appropriate strategies for the sector.

He added that an aggressive widespread and intensive sanitation campaign would also be launched in the near future to address the attitudinal issues.
According to him, the ministry was also working assiduously to bring to fruition the President’s vision of making the national capital one of the cleanest in Africa.

In view of these, Mr Adda said, the ministry would work hand in hand with Tersus Ghana and government ministries, departments and agencies (MDAs), as well as the private sector to execute unrelenting sanitation promotion strategies to ensure the physical environment was sustainably clean.

The minister said a programme would soon roll out to rebrand and build the capacity of environmental health officers, formerly called ‘Samansaman’, and added that the ministry was also collaborating with other MDAs in stepping up a law enforcement strategy to sanction all individuals for non-compliance with sanitary regulations.

Professor Martin Oteng Ababio from the University of Ghana, who delivered a paper on the sanitation situation in Ghana, mentioned communal apathy, attitudes and behaviours, lack of dedicated and sustained programmes on sanitation as some of the underlying causes of the current sanitation challenges.

He said there had always been a disconnect between public perception and appreciation of the importance of sanitation and the place of sanitation practitioners in the society, and this was due to historical and cultural reasons which were totally out of touch in the modern world.

He, therefore, stressed the need for a recognised body which could co-ordinate all research findings on sanitation and the environment and harness them for the benefit of the country.

Prof. Ababio indicated that since 1993, there had not been any waste management audit whatsoever in the country and work that had been done so far was merely pockets of extrapolated data in the environment sanitation sector.