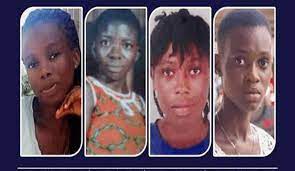 The defence lawyers for two Nigerians standing trial for the murder of the four missing ‘Takoradi girls’ yesterday failed to appear before the Sekondi High Court without prior notice.

At the last adjournment, the court ordered the prosecution to file its written address by February 17, 2021, while the defence counsels for Samuel Udoetuk-Wills and John Oji were to file their written addresses by February 24, 2021, for oral submissions to be heard yesterday.

However, both counsels failed to file their written addresses as directed by the court, and did not show up in court at all yesterday, with no explanation.

The court, presided over by Justice Richard Adjei-Frimpong, a Justice of the court of Appeal, with additional responsibility as a High Court judge, said the verdict of the jury, fixed for tomorrow, would be delivered as scheduled.

The court, however, adjourned proceedings to today to enable counsels to address the jury before tomorrow’s verdict is announced.

During cross-examination of the second accused, John Oji, he told the court that the purported social media conversation between him and the first accused, Samuel Udoetuk-Wills, did not come from his phone.

He explained that the phone he was using did not support social media apps (WhatsApp and Facebook), and that the comments on Udoetuk-Wills' phone could not be his.

He said he was told about the missing ‘Takoradi girls’ after he had been lured into Togo and Ghana by the investigators who arrested him without a warrant.

Oji said he was informed about the missing ‘Takoradi girls’ by the investigators after his arrest, and denied everything, including his own statements and the dates.

For his part, Udoetuk-Wills told the court during cross-examination by his counsel, Mr George Essiful-Ansah, that: “I have never kidnapped before, and I am not a kidnaper; when I heard of the kidnapping I was shocked myself”.

Out of the four missing girls, he said he knew only two — Priscilla Blessing Bentum and Priscilla Mantebea Koranchie, “but I don’t know Ruthlove Quayson and Ruth Abaka”.

The accused explained that he first met Priscilla Bentum at Effiekuma Methodist Church, and they became friends in 2017 while he and Koranchie met in an area called Phastor Block Factory in 2018.

“I was a casual friend to both girls and I exchanged contacts with each of them. I got to know they were missing when my girlfriend called to inform me while I was far away in Koforidua,” he said.

Udoetuk-Wills said at the police station, he was asked if he knew the girls. “I told the police ‘yes’ and that I knew only two”. He said he got to know about the other two girls while in police custody.

He said after his first arrest, he escaped from lawful custody, saying, “I did not run home or sleep at home because I was scared. And I did not also run to Nigeria because I know I did not commit any crime or kidnapped my two friends and two others as alleged”.

The accused also said while in the custody of the National Investigation Bureau (NIB) he was tortured to say things that were not true.

He said the NIB operatives did not believe him, and that he was forced to say things under duress, including saying he knew the whereabouts of the girls just to be free.

He said due to the severity of the torture, he was forced to mention his childhood friend John Oji and some of his friends in Koforidua as his collaborators, which in actual fact was not true.

“The NIB officers made me call John in Nigeria. I was directed to ask John the whereabouts of the girls. Then I gave them John’s number, and they called and put the phone to one loud speaker,” he said.

“I asked John the whereabouts of the girls, and John was puzzled and asked me which girls and that he didn't know what I was talking about and asked me to call later since he was busy at the market place,” he said.