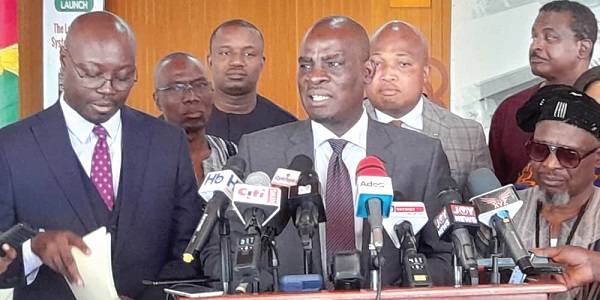 Haruna Iddrisu (middle), the Minority Leader, addressing the press. With him are some members of the Minority Caucus. Picture: Nana Konadu Agyeman Follow @Graphicgh

The Minority Caucus in Parliament has called on President Nana Addo Dankwa Akufo-Addo and the Vice-President, Dr Mahamudu Bawumia, to take full responsibility for the prevailing economic challenges facing the country.

According to them, it was as a result of the reckless and irresponsible borrowing by the government, as well as unjustified profligate expenditures that had pushed the nation to request a bailout from the International Monetary Fund (IMF).

“President Akufo-Addo and Dr Bawumia should take full responsibility for incompetently managing the economy and suffocating debt levels which have necessitated the retreat for us to request an agreement with the IMF for the restructuring of the country’s debt,” it added.

The Minority Leader, Haruna Iddrisu, made the call when he addressed the media in Parliament yesterday[July 6, 2022].

A high-level delegation from the IMF arrived in the country yesterday to start discussions with the government on how to support the nation out of its economic challenges.

The in-person meetings with the government began in Accra yesterday.

The Minority Leader said on July 1, 2022, President Akufo-Addo and the Chairman of the Economic Management Team, Dr Bawumia, retreated from their earlier stance of not seeking IMF support and announced the desire, intention and decision of the government to engage with the fund to bail out the country from its economic difficulties.

He described the behaviour of the government as childish and urged it “to stop any attempt to shift blame”.

He proposed that the government must be prudent in spending by reducing its expenditure, particularly on social intervention programmes.

On the electronic transfer levy (E-levy), Mr Iddrisu said it remained an unpopular tax instrument, adding that the fact that the E-levy Bill was passed in Parliament did not mean it had the support of the Minority.

The Tamale South MP further said what was of great concern to the NDC Minority was what he described as the arrogant posture of the government not to seek advice from other stakeholders.

“They arrogantly rejected every reasonable and constructive suggestion from us and from other respected economists and citizens in working together to improve the economy.

“What they must learn to live with is that once the people voted for a hung Parliament, it means the days of opposition are over,” he said.