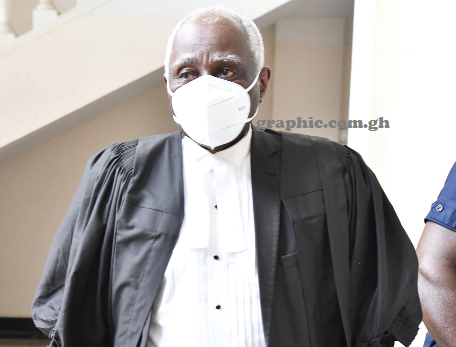 The legal wrangling over whether the Chairperson of the Electoral Commission (EC), Mrs Jean Adukwei Mensa, should testify in the 2020 presidential election petition has taken a new shape.

Watch a live stream of today's hearing below;

The Supreme Court will today rule on an application by the petitioner, former President John Dramani Mahama, seeking leave (permission) of the court to reopen his case to enable his lawyers to subpoena Mrs Mensa to appear before the court and testify as a “hostile witness”.

The lead counsel for the petitioner, Mr Tsatsu Tsikata, yesterday urged the court to grant his client the permission to reopen his case in the interest of “substantial justice”.

That was opposed by lawyers for the respondents (the EC and President Nana Addo Dankwa Akufo-Addo), who argued that the application was an attempt by the petitioner to force the EC Chairperson to enter the witness box by all possible means, even after the court had upheld her decision not to testify.

First, he submitted that Mrs Mensa had made it clear that she was ready to be cross-examined by the petitioner when she deposed to an affidavit challenging the petitioner’s application for interrogatories.

He said Mrs Mensa had indicated that the interrogatories were not necessary, as those questions could be asked during cross-examination.

At that point, Justice Gertrude Torkornoo, one the seven justices hearing the petition, asked counsel the capacity in which Mrs Mensa would testify.

“She is coming as the witness of the petitioner in what could be described in common law as ‘hostile witness’,” Mr Tsikata answered.

The second leg of Mr Tsikata’s argument was that Mrs Mensa should be subpoenaed to testify to enable her to give an account of her stewardship during the December 2020 elections.

According to him, Mrs Mensa owed a duty to clear the minds of Ghanaians about any alleged misconduct on her part during the elections in 2020.

“She must be interested in letting the world know that she exercised her duties with due process,” counsel argued.

In his response, counsel for the EC, Mr Justin Amenuvor, described the application as an abuse of the court’s process and urged the court to dismiss it.

He argued that it was an attempt by the petitioner to patch his weak case with the introduction of new evidence from the Chairperson of the EC.

According to him, there was no settled practise or case law that allowed a party which had closed its case to reopen it and introduce new evidence through the other party.

Such a move, he said, would collapse the adversarial system of litigation in the country’s jurisprudence, where a party was not enjoined to help the case of his opponent.

Counsel for President Akufo-Addo, Mr Akoto Ampaw, for his part, contended that the application was basically opposing the EC’s decision not to adduce any evidence, which, in effect, meant that Mrs Mensa would not testify.

The decision by the EC not to adduce evidence, he argued, was affirmed by the court in its ruling on February 11, and as such if the court upheld the application by the petitioner, it meant it would have taken away what it had already granted the EC.

“The court cannot affirm and then disaffirm the right of the first respondent not to adduce evidence,” counsel said.

Former President Mahama, therefore, wants the Supreme Court to declare the declaration on December 9, 2020, as null and void and also order the EC to conduct a run-off between him and President Akufo-Addo.