Seized rosewood to be donated to National Cathedral project 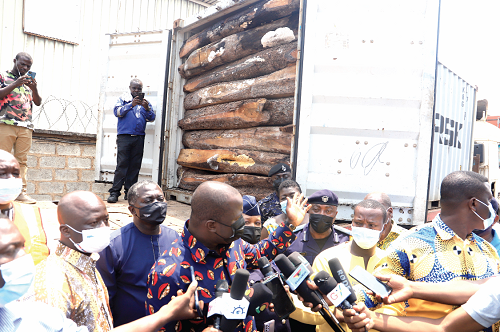 Mr Samuel Abu Jinapor (hand raised), Minister of Lands and Natural Resources, explaining a point to the media after inspecting the confiscated Rosewood at the Global Container Terminal at the Tema Port. Picture: Samuel Tei Adano

The government will, henceforth, donate all rosewood confiscated by the state towards the National Cathedral project, the Minister of Lands and Natural Resources, Mr Samuel Abu Jinapor, has said.

In line with that, five containers of the wood species which were confiscated at the Tema Port on June 17, 2021, by the Customs Division of the Ghana Revenue Authority would become the first of such donations towards the project.

“Following this new decisions, in addition to the existing ban on the export of rosewood, public auctions for the domestic use of rosewood will no longer be undertaken,” Mr Jinapor said.

Speaking to journalists yesterday during an evacuation of the consignment from the Global Container Terminal (GCT) near the Tema Port, Mr Jinapor indicated that until such a time when the government was assured that the cathedral project had enough of the species, other measures would be taken by way of donating the wood to other public institutions that may need the it.

“If at any stage it will become necessary to undertake a public auction of the species for domestic use, the public can rest assured that the process will be done with the sense of integrity since the lands and natural resources constitute the property of the Ghanaian people,”he said.

Mr Jinapor was accompanied by his deputy, Mr Benito Owusu-Bio; a Deputy Minister of Transport, Mr Kingsley Aboagye Gyedu; the Chief Executive of the Forestry Commission, Mr John Allotey, and some officials of the Customs Division.

In June, this year, customs officials at the port issued a detention notice on the five containers after officials of the Energy Commission had trailed the consignments to the terminal on suspicion that it contained charcoal meant for export without the requisite permit.

An examination of the containers however revealed the banned species, prompting the detention and subsequent confiscation after the mandatory 30-day period as prescribed in the customs regulations.

Following the evacuation to the Achimota Depot of the Forestry Commission, the minister indicated that the necessary documentations on the consignments will be processed to ensure their release to the trustees of the cathedral project.

He said investigations conducted into the seizure by the ministry identified the individuals involved in the attempt to illegally export the species and the police were being notified to institute criminal investigations into the matter.

The minister, however, did not mention the names of the individuals and companies he said were identified in the ministry’s investigative report, saying, “we will put out the names at the appropriate time.”

“ Per the rules put out by the ministry, if an individual or company attempts to export the banned species, it constitutes a criminal offence so whatever consequential criminal action by way of prosecution that needs to be taken, we expect the police will pursue that,” Mr Jinapor said.