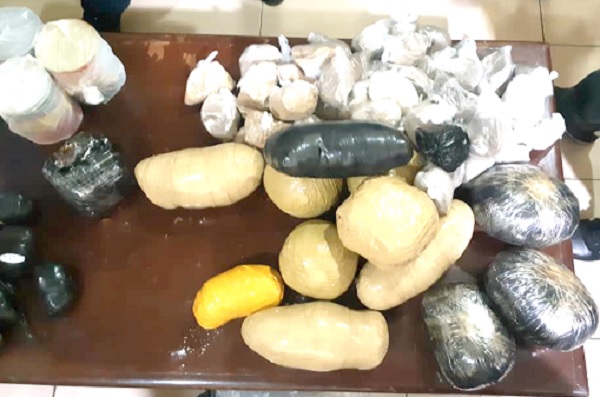 Some of the intercepted narcotic drugs

A collaboration among the Customs Division of the Ghana Revenue Authority (GRA) and other security agencies has led to the interception of some substances suspected to be high-value narcotics and an amount of $200,000 at the Kpoglu Border Post in the Ketu South municipality in the Volta Region.

The suspected narcotics and the money, which was in $100 and $50 bills, were busted on Friday, June 8, 2020 during a joint search on a Toyota Land Cruiser Prado vehicle with a Nigerian registration number, LSR 815 FV, which was crossing into Ghana from Togo.

Apart from Customs officials, personnel of the other security agencies, including the Narcotics Control Board (NACOB), the Bureau of National Investigations (BNI), the Ghana Immigration Service (GIS), the Ghana Police Service, among others, took part in the joint check.

Briefing the Daily Graphic, the Commissioner of the Customs Division of the GRA, Colonel Kwadwo Damoah (retd), said although the substances were yet to be verified, “I can say they are of the high-value narcotic category”.

He said they were intercepted during a routine operation by the joint security personnel at the border when the vehicle, with only the driver in it, pulled up at the border post from the Togo end about 12.40 p.m. last Friday.

The driver of the vehicle, he said, had declared it was carrying vehicle spare parts, but while the vehicle was being inspected by the joint team, the driver took to his heels.

Col Damoah said in addition to some spare parts which were in the vehicle, the security personnel found wads of foreign currency and substances wrapped in black, brown and transparent tapes concealed in an empty gas cylinder which served as a second fuel compartment for the vehicle.

Later, officials of the GIS, who joined other security personnel to cross-check the items, opened the cans and found that they also contained some white substances wrapped in transparent polythene.

A bag which was found in the vehicle contained two Nigerian passports bearing the names Orhoser Endurance and Osiboko Ochuko Gabriel; a driver’s licence with the name Aminu Saliu Sholadoye, documents covering the Toyota Prado and complementary cards with the name Sylvester Olu Oluwagbemiga.

The complementary cards had the pictures of the Presidents of Ghana and Nigeria and also the flags of both countries.

Some candles and other items tied together and wrapped in a white cloth with the inscription ‘Alpha and Omega’ were also found close to where the suspected narcotic substances were concealed.

Col Damoah, who described the discovery of the suspected narcotics as a major operation, commended all the personnel whose vigilance led to the interception.

“With the collective efforts of all the agencies in the management of our borders, we will be able to secure our borders,” he said.

Speaking in a separate interview, the Head of Communications and Media Relations at NACOB, Mr Francis Amoah, said for some time now NACOB officials at the Kpoglu Border Post had been monitoring the driver on suspicion that he was dealing in drugs.

"Based on intelligence, we put surveillance on him, and immediately he arrived at the border post in charge of the vehicle, we suspected foul play," he said.

Mr Amoah said after Customs officers at the border post had undertaken a physical examination of the vehicle, the NACOB officer present requested that a scan be taken of the vehicle too.

"We realised there were two fuel compartments, and in the process of trying to bring the things from one of the fuel compartments, the driver sped off and our officer pursued the car with a motorbike and hit the vehicle with it. The driver stopped and took to his heels," he said.

According to Mr Amoah, the NACOB officer called for reinforcement from Aflao.