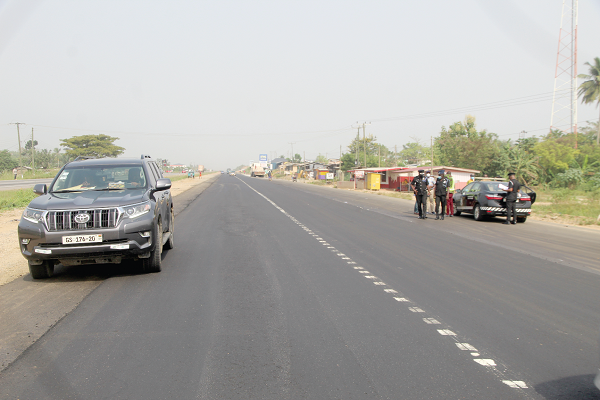 A portion of the Kwafokrom-Apedwa section of the Accra-Kumasi highway. Picture: ESTHER ADJEI Follow @Graphicgh

The Kwafokrom–Apedwa section of the Accra-Kumasi Highway has been opened to improve traffic flow on the corridor during the Christmas festivities.

From January 1 next year, sections of the road will be closed again for work to continue.

Engineers on the site confirmed that although the project was partly completed, the 31.7-kilometre road was still safe for public use.

The Minister of Roads and Highways, Mr Kwasi Amoako-Atta, who opened the road yesterday, has instructed the Eastern Regional Motor, Transport and Traffic Department (MTTD) of the Ghana Police Service to assist drivers for the first two days after opening.

Prior to the opening, the minister embarked on an inspection tour of the entire stretch to check the progress of work and the safety of the road to motorists.

Currently, the asphalt laying and surface dressing on the entire road has almost been completed.

Temporary rumble trips have been placed on parts of the road to alert inattentive drivers of any potential dangers.

The stretch in its current state, however, lacks road signs while road markings are not yet completed.

“We are clear and satisfied that the road is safe for use, and I am certain that drivers will ply this road without going through any challenges,” Mr Amoako-Atta said.

He gave the assurance that within the first quarter of 2022, works would begin on all the various sections on the Accra-Kumasi road that experienced gridlocks.

Some of the earmarked towns, he said, were Bunso, Osino, Enyinam and Konongo.

He further reiterated that the government was trying every means possible to dualise all trunk roads by 2024.

The interventions, he said, would make the roads safer and significantly reduce crashes and carnage.

“A lot of dual carriage projects are ongoing and we are going to make sure that by the end of 2024, as many trunk roads as possible and practicable would have been dualised to provide safety for our people and to stop road accidents,” he added.

The Resident Engineer, Mr Anane Apraku Appiah, said work on the road was 70 per cent complete.

He said there were eight separate footbridges which had been earmarked at the various towns along the road to guarantee the safety of residents in those areas.

The construction of such footbridges, he indicated, were not part of the original project contract so a separate proposal had been sent to the Ghana Highways Authority for approval.

“We will be doing some access roads to the towns along the highway, but with the main road, somewhere February-March we should finish,” Mr Anane-Appiah said.