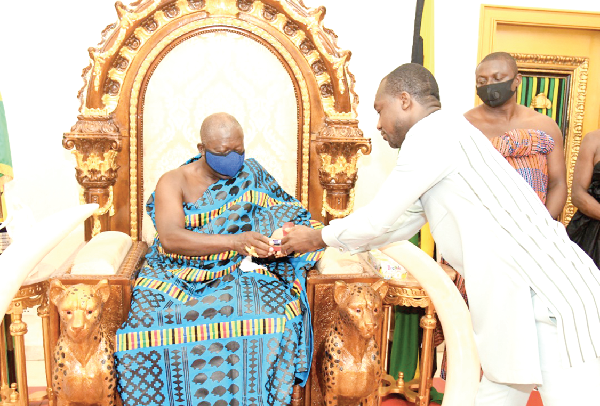 Conflict prevention mechanisms should be implemented to sustain the prevailing peace in the country, the Asantehene, Otumfuo Osei Tutu II, has said.

That, he said, required careful monitoring of rising signs of tension and activating the necessary mechanisms to ease them.

The Asantehene said this when he was officially presented with a gold coin at the Manhyia Palace in Kumasi in the Ashanti Region.

The presentation was made by officials of Access Bank, which is in charge of the auction and sale of the coins, the Gold Coast Refinery, which minted the coins, and the E ON 3 Group which initiated the concept, in collaboration with the Manhyia Palace.

The gold coins were launched at the Manhyia Palace on December 12, this year to honour the Asantehene for his role in peace-building in the country over the past two decades.

The Otumfuo said building a strong conflict prevention culture should not be limited to rhetoric but must be carried through with practical measures.

He said for more than two decades since he assumed the reins of the Golden Stool, his peace initiatives had not been limited to only Asanteman but the entire nation.

In Asanteman, for instance, he said he got all chieftaincy cases withdrawn from court for settlement through the Asante traditional system.

He further said no country could realise its development objectives without peace, adding that the current democratic system could not thrive in an atmosphere of chaos.

Otumfuo Osei Tutu said in all his arbitration efforts, he had been fair to all parties, ensuring that winners were magnanimous in victory, while losers were gracious in defeat.

He said if people lived together in peace, with a common destiny, it would facilitate accelerated development.

The Asantehene expressed appreciation to the initiators of the coin project for recognising his peace initiatives and also minting the gold coin in his honour.

The Executive Director of the E ON 3 Group, Mr Richard Adjei Mensah Ofori Atta, who led the officials to Manhyia, said they were excited by the entire coin minting project, which he described as very successful.

He said there were plans to present the gold coins to other notable kings in Africa to support them in their peace efforts in their respective jurisdictions.

Mr Ofori Atta said the E ON 3 Group would partner the Manhyia Palace to work towards ensuring peace before, during and after the 2024 general election.