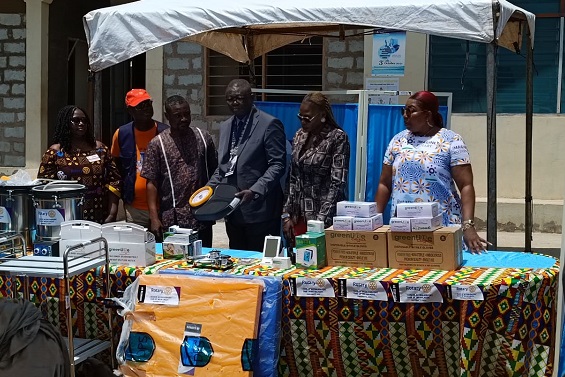 The Rotary Club of Accra-Airport and the Rotary Club of Ikeja, Lagos, have donated medical supplies valued at GH¢25,000 to the Cleantown Heath Centre at Nungua, Accra as part of efforts to improve health delivery at the facility.

The donation was in response to a request made by the administration of the Cleantown Heath Centre after the recent national polio immunisation exercise, for which the Rotary Rotary Club of Accra-Airport was assigned the Nii Larweh Electoral Area where the Cleantown Health Post is located.

Speaking on the sidelines of a ceremony to present the items to the Health Centre last Saturday, the President of the Rotary Club of Accra-Airport, Mr C. C. Bruce said following the request and the needs assessment, the Rotary Club of Accra Airport decided to partner with its counterparts from Ikeja whose members had scheduled a retreat in Ghana.

He was hopeful that the partnership would be the start of a "twin-club" relationship that would be of mutual benefit to their respective societies.

Mr Bruce added that key areas of focus for both clubs were health and wealth, reminding members to make a meaningful impact on their societies.

For his part, the President of the Rotary Club of Ikeja, Lagos, Mr Sola Akinsiku said the donation was just the beginning of the relationship between the two clubs.

He was hopeful that members of the Rotary Club of Accra-Airport would soon visit Nigeria for a similar project.

Receiving the items on behalf of the hospital, the Assemblyman for the Nii Larweh Electoral Area expressed gratitude to the two clubs for coming to the aid of his residents.

He was particularly excited about the swiftness of their response to the request from the health centre's administrators.

Similarly, the Senior Public Health Officer at the centre, Mr Alfred Dom Boson welcomed the support and expressed appreciation to the two clubs, urging other charitable individuals and organisations to emulate the gesture.