Accra-Tema Motorway open to traffic after completion of repair works 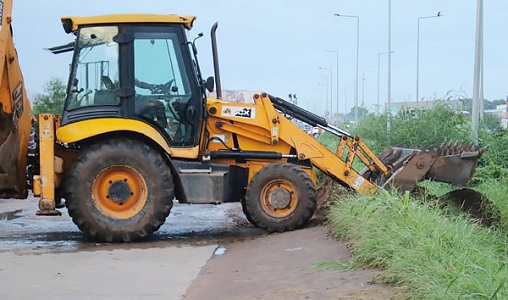 The Accra-Tema Motorway, which was partly closed for repair works on the damaged Lakplakpa River Bridge, has been open to traffic following the successful completion of the rehabilitation works.

It was open to traffic Friday morning after laboratory analysis of the concrete works was done on Thursday, June 16, 2022, ahead of the 14-day schedule indicated for the project.

The analysis was to help safeguard the integrity of the structure, as well as ensure that it can withstand the axle load capacity that plies the stretch on a daily basis.

The Project Engineer, Aaron Nana Amponsah, told the Daily Graphic at the project site that the works would he required to be certified as conforming to all the necessary safety strengths.

“We are looking for a compressive strength of 30 Newtons per square millimetre within the 24-hour period that the concrete was cast,” he said.

Deep into last Wednesday night, the concrete works were laid, and, by the next morning, they were completed.

When the Daily Graphic visited the site, it observed that the concrete works had been completed and the area still cordoned off to ward off any interference.

The work area still had the working tools packed up to suggest that work was ongoing.

Mr Amponsah explained that until the outcome of the laboratory test, it should be deemed as work was ongoing, adding that once the green light was given from the test, the construction site would be cleared of all debris and construction hazards that could pose a safety concern to commuters.

The rehabilitation, which was started on June 4, 2022, saw the bridge and the iron road enforcement being replaced entirely following the dilapidated conditions they were in, a situation which led to heavy gridlock along the motorway.

The gridlock extended to the main roads connecting Tema to Sakumono, Ashaiman and Bungua areas.

Ahead of the reopening of the motorway, commuters have called on the GHA to reconsider working on the numerous potholes that dot the stretch from the Tema Toll Booth to the Tetteh Quarshie Interchange.

Traffic, as usual, was heavy from 5 a.m. to the evening, presenting Okada riders with booming business as the motorbike became the most reliable means for many commuters to get to their destinations on time.

Some workers of major factories along the stretch resorted to trekking on foot as a means of getting to their workplaces.

Hawkers too had a field day, as the traffic congestion provided them an avenue to hawk their wares, even during the rains.

Over 50 policemen and women, drawn from Tema, Ashaiman and the Highway Patrol Unit of the Police Service, ran shifts to ensure a well-coordinated traffic control.