BY: Emmanuel Bonney
Category: General News
The state of the Alontey Bar, La Beach Road after the downpour Follow @Graphicgh

Last Wednesday’s downpour has worsened the deplorable nature of roads in the capital city, Accra.

Yesterday[June 16, 2022], the Daily Graphic went round parts of the city and witnessed potholes that had been deepened and widened. 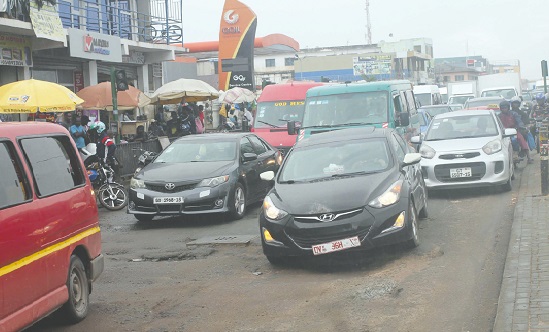 In other places, water had collected on roads.

Receded floodwaters left marks on walls and buildings at Osu and on the LEKMA road.

At Kaneshie Mpamprom, the outer lane of the road from Kaneshie towards the Obetsebi Lamptey Roundabout was flooded, compelling drivers to use only one lane as they approached the Mpamprom traffic lights. 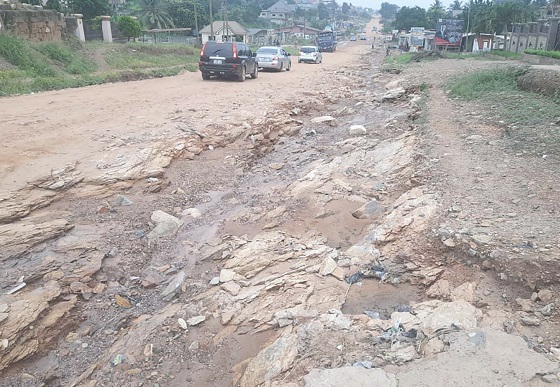 The situation resulted in huge traffic on the road stretching as far back as the Police Quarters.

At the UTC around the Rawlings Park, there were huge gullies. Drivers plying the route had to be extra careful in order not to damage their cars.

A number of people who spoke to the Daily Graphic expressed concern about the state of the roads.

Expressing his frustrations, Jonas Tetteh, who dealt in socks and other items, said although the state of the road had not been the best, it had worsened with Wednesday’s rains.

“You can see the road for yourself, it is bad and I wonder why till now it has not been fixed,” he lamented.

On the Dr Busia Highway, drivers and passengers stuck in traffic could be heard grumbling.

Two drivers, Peter Ansah and Rashid Musah, said there was a need for the authorities to deploy the maintenance team quickly to get the roads in shape.

For his part, Mr Musah said any delay in fixing the bad roads would result in the waste of productive man-hours.

On the La Beach Road, a taxi driver, Jonas, was spotted holding a broken piece of PVC pipe directing other drivers to avoid the potholes on the road.

Rashid, a dealer in funeral and traditional items at Osu, confirmed that parts of the area got flooded as the gutters could not contain the huge volumes of rainwater.

He showed the Daily Graphic a video of the flooding and stated that the gutters in the area were too small.

A mobile money vendor who operates off the LEKMA, Mercy Tetteh, said although the waters had receded, the state of the road needed urgent attention.

The state of the Aplaku road had not changed at the time of the Daily Graphic’s visit as erosion had eaten up part of the road.